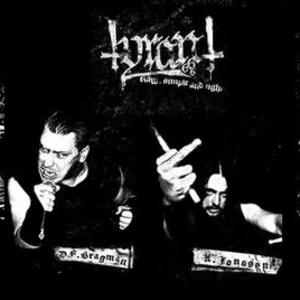 There are at least 9 bands with this name: 1. Tyrant are a hard rock/heavy metal band from Tasmania, Australia. The band originally formed in the early 1980s as an AOR band called Slyder. In 1982, the band changed their name to Tyrant and began playing a harder-edged style of blues-influenced rock in the style of AC/DC and Rose Tattoo and Mot?rhead. In 1984, Tyrant released a four-track EP called Never Too Loud, which topped the metal charts on the local radio stations and gained them a massive following in Tasmania.

1. Tyrant are a hard rock/heavy metal band from Tasmania, Australia.

The band originally formed in the early 1980s as an AOR band called Slyder. In 1982, the band changed their name to Tyrant and began playing a harder-edged style of blues-influenced rock in the style of AC/DC and Rose Tattoo and Mot?rhead. In 1984, Tyrant released a four-track EP called Never Too Loud, which topped the metal charts on the local radio stations and gained them a massive following in Tasmania. A successful tour of Tasmania followed, and Tyrant moved to Sydney, becoming one of the leading hard rock bands in the city. After headlining the inaugural "Metal Crusade" show in 1985, Tyrant split up the following year due to different musical interests among the band members.

In 1986, Tyrant guitarist Andy Zarins reformed Slyder, which split up again in 1990 after releasing one single titled Dreams.

Tyrant still continue to this day, and a third album has been announced for recording in 2006.

A German Metal band hailing from the Ulm area, TYRANT were fronted by the hilariously named Kerrmit. TYRANT issued a number of independent albums through the mid to late 80s. The band would be part of the Garattoni/Marek production and management team roster, based in Kirchheim/Teck near Stuttgart in Southern Germany, and also including such artists as STORMWITCH, STRANGER and GRAVESTONE. The initial TYRANT release, 1984's ?Mean Machine', released by Camel Records and recorded in Spygel Studios in Kircheim in July through August of 1984 it was engineered by Batze Kramer, featured Kerrmit, the guitar pairing of Carl Tomaschko and Holgar Thiele, bassist Andre Papack and drummer Micky Budde.

Although TYRANT switched labels to Scratch Records the band line up remained stable for 1985's follow up 'Fight For Your Life'. Once again cut at Spygel Studios, the record was mixed by Tom Kr?ger and engineered by Batze Kramer. In later years this opus would see a re-release through LaserLight on their Metalmania line in CD form, with a different title of 'Metal Rules'.

Thiele would decamp upfront of the third effort 'Running Hot'. Engineered by Hartmut Sauter, once again TYRANT recorded at Spygel Studios with Tom Kr?ger acting as mixer. For their fourth album, 1988's 'Ruling The World' recorded at Zuckerfabrik Studios in Stuttgart, TYRANT underwent a major line up change by ditching a guitarist and their rhythm section. Alongside Kerrmit and ?King' Carl Tomaschko the band's new recruits were guitarist Phil Zanella, keyboard player Robert Kosch, bassist Chris Peterson and former GRAVESTONE drummer Dieter Behle. Once again, Laserlight re-issued the album clad in new artwork under the new guise of 'Blind Revolution'.

Released possibly in 1990 the band's last album would be a live effort entitled ?Live And Crazy', released on the Musicolor label. This album saw the departure of founding member, lead songwriter and "all around madman" Carl Tomaschko. By this juncture Kerrmit was now the only original member, working with a TYRANT comprising Sterzik and Kees on guitar, Oppold on drums and Chris Peterson appears on bass.

Interestingly, an album that has been attributed to the band, 'Of Once And Further', has not been confirmed even after years of searching by collectors. No images or track lists have been found and other than inclusion on a very few internet lists there's no other information on this alleged release.

3. Tyrant (swe) was created in early 2007 by Peter Bj?rg? (Arcana, Crypt of Kerberos, Sophia, Meanwhile), Danel Bragman (Vinterland, The Black) and Anderas Jonsson (Vinterland, The Black). During the recordings of the next album of The Black the thought of something old, dirty and raw came in mind. It was the thought of getting back to the roots with a sound like Venom, Celtic Frost, Hellhammer and more. The debutalbum "Reclaim the flame" was released by Listenable, but the band is signed to Pulverized Records. This album is also to be found as LP via Hells Cargo, and the LP has an extra song (Bathory cover). During the summer of 2007 they were joined by Daniel Ekeroth (Dellamorte, Insison and writer of the book "Swedish Death Metal"), which made the band complete.
At the moment (November 2007) they are on tour with Gorgoroth (N) and Enthroned (NL).

4. The doom metal band Saint Vitus were originally called Tyrant before changing their name in 1979. http://www.metal-archives.com/band.php?id=83992

5. There were also a British band from the NWOBHM era who released the songs Hold Back the Lightning/Eyes Of A Stranger on a 7" back in 1983.

6. Tyrant is a dubstep producer from Austin, TX.

7. Tyrant is a mid-80s US Heavy Metal band. Their main Lyrical theme is Religeon.
http://metal-archives.com/band.php?id=494

In '78, Greg formed a band in high school, just for fun, nothing serious. It included Richard Fuentes on vocals, Tony Ramirez, Gary Crisp,and Bill Stremmel on guitars, and Phil Hilick on drums.

By 1980, Greg had played with members of such groups as Metallica, W.A.S.P., Armored Saint and Warlord, just to name a few. Guitarist Rocky Rockwell's (3-29-61) previous band, Visions, ironically featured Tim Gains of Stryper.

In '82, the two recruited Greg's brother, Glen May (8-13-63), a big (6'3", 230 lbs.), violent high school football player, to replace their previous singer Doug Anderson, on lead vocal and frontman requirements. "Doug also played guitar and looked like Peter Frampton." Greg explained. "It didn't work. Glen's football career was over after high school, so I brought him in and it clicked." Previous drummers have included Rob Roy, G. Stanley Burtis and Tom Meadows.

After two shows in Hollywood, California, Brian Slagel of Metal Blade Records and the band Bitch contacted Greg of TYRANT. The late 1983 release of "Battle of Armageddon", from the Metal Blade Records album "Metal Massacre III", was the result. After the release the label was flooded with mail from all over the world demanding more vinyl from TYRANT. This lead to Metal Blade Records signing TYRANT to an international recording contract.

The group returned to the studio with "Armageddon" producer Bill Metoyer, to record TYRANT's debut LP, "Legions of the Dead" which was completed and released in 1985. The LP sold well and hit Kerrang Magazine's (Europe's biggest rock publication) top ten import chart for two months. TYRANT's single, "Listen to the Preacher," was featured on the "Best of Metal Blade, Volume 1" double LP in 1986. The LP included, among others, Slayer, Trouble, VoiVod, Metal Church and Celtic Frost.

In 1988, contractual agreements demanded another vinyl release from the group, so they again enlisted the services of producer Bill Metoyer, then recorded and released "Too Late to Pray"--their best effort to date. Again, TYRANT's LP attracted praise from both fans and magazines around the world. The band had been offered opening slots for groups such as Slayer, Savatage, and Mercyful Fate, but the band felt that they were equal to these groups and should not have to open, so they declined on those tours.

The band continued to play live and demo songs on 4-track. In 1994, Metal
Massacre III was re-released on C.D. worldwide; after which the band's attorneys Mark and Earnie contacted Metal Blade Records and the rights to TYRANT's material and band name were assigned to founder/bassist Greg May.

Thanks to an advertisement in Factor X magazine and a guy named Chris Liebengut, the word was out and two German record labels fought for the group. Art of Music won the battle and brought Greg May to Germany for a promo tour. Art of Music also put TYRANT back into the studio witb long time producer Bill Metoyer for the making of "King of Kings," which was released in 1996. In keeping with tradition, "King of Kings" gained international praise from fans and press alike.

Preparing to hit the club circuit to correspond with the new CD "King of Kings" and the re-issues of "Legions" and "Too Late", guitarist Rocky Rockwell backed out of two big shows that had been agreed to.

TYRANT recruited long time acquaintance, Anthony Romero, former guitarist of previous Metal Blade group, Blood Lust. Blood Lust had an L.P. in 1985 entitled "Guilty as Sin". Anthony is in the vein of Uli Roth, Blackmore and Iommi rather than Satriani, as Rocky Rockwell had become.

As of 1997, the band has been writing new TYRANT material. The first songs are "Evil World," "Soul Taker," and "Crimson Hill". They have also just signed with Dwell Records to do Motorhead and Black Sabbath tribute CD's that will be released worldwide in '98-'99. The band is gaining momentum for the new millennium."

The band was working on new material after King of Kings, but it seems like nothing ever came of this. Some songs they had done at this time were "Evil World" (which can be heard at the "Band info" site below), "Soul Taker," and "Crimson Hill." It appears that the fan site which contains this information has not been updated since the very late 1990s.

8. Tyrant is sympho black metal band from Japan. It was formed in 1994 and has 3 LPs in its discography.

9. Tyrant is a thrash metal band from Leeds, UK. Tyrant was formed in October 2010 by students and graduates of leeds university. Thier first EP is recorded and due to be released in April 2012.

Too Late To Pray