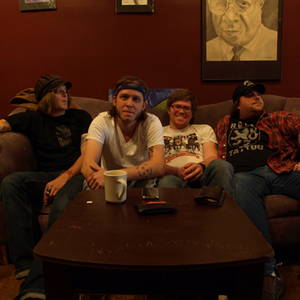 Comprised of Micah Schnabel (vocals, guitar), Shane Sweeney (bass, vocals), Andy Schell (keyboards), and Cody Smith (drums), the outfit, which plays more than 200 shows a year (and has for the past six years), has made their darkest, yet most rewarding record to date, writing songs that deal with the problems and dilemmas of growing up, coming to terms with ones dreams versus reality, as well as songs about substance abuse...

With "Speaking in Cursive", Two Cow Garage has brought on a permanent keyboard player with Andy Schell, helping the band expand on their guitar-bass-drum assault, adding depth and richer melodies to the heartbreak-on-the-sleeve lyrical bite and rock attack that Two Cow Garage is already known for.

From the opener of "Your Humble Narrator", starting out with Schnabel's tattered, smoke-filled voice, the song builds, from a toned-down guitar-bass-drum attack that turns into something melodic and poignant with the addition of keys, before quickly busting into the chorus and ripping through you with pure adrenaline.

Through the all-out classic-rock-gone-punk vigor of "Brass Ring", ringing with the line, "don't ever be second stage, apathetic melancholy is all the rage, there was never any brass ring to be found", as the band comes to grips with the fact they do music for the love of it, not for the "Brass Ring" or any other reason.

To "Bastards and Bridesmaids", a song that questions youth and wasted youth with plenty of guitar noise buzzing as the rhythm section pounds it out, before quickly sliding into an unforgettable hook, and "Swingset Assassin", a haunting acoustic number that is anything but soft and pretty: abrasive and cutting, Two Cow Garage can rock out and bring you to tears with nothing more but voices and an acoustic guitar:

The album's "Sadie Mae" really shows off the beauty of keys in a melancholy rock song, reeling you in while the lyrics and the story line bring you to your knees in tears as you wrap yourself up in the story of "Sadie Mae", and when the line "If the love doesn't kill me, the loneliness will. And if these drugs don't thrill me, then nothing else will".

Ending with "Swallowed By the Sea", one of two songs bassist Sweeney sings lead on, the band gets more roots-y and ends with a heart-wrenching, alt. country song to put others to shame.

The Death Of The Self Preservation Society

Under The Influence Vol. 9 (EP)

The Wall Against Our Back

Please Turn The Gas Back On