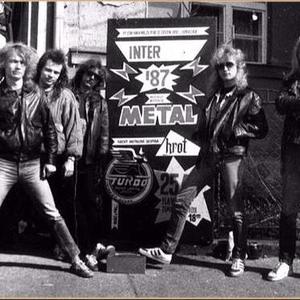 There is more than one artist with this name: 1) Turbo is a polish metal band. It was started in January 1980 by Henryk Tomczak (formerly in Stress and Heam, both pioneering polish hard rock groups). The first line-up were formed by Wojciech Hoffmann ? guitar, Wojciech Anio?a ? drums and Wojciech Sowula ? vocals. Soon a single was released, the tracks being W ?rodku tej nocy (Deep in the Night) and By?em z tob? tyle lat (So many years with you).

1) Turbo is a polish metal band. It was started in January 1980 by Henryk Tomczak (formerly in Stress and Heam, both pioneering polish hard rock groups). The first line-up were formed by Wojciech Hoffmann ? guitar, Wojciech Anio?a ? drums and Wojciech Sowula ? vocals. Soon a single was released, the tracks being W ?rodku tej nocy (Deep in the Night) and By?em z tob? tyle lat (So many years with you). The band's style back then was very much like 70s - early 80s hard rock. November 1980 the singer quit, and was replaced by Piotr Krystek. New tracks were recorded, and frequently aired by the radio. Soon more line-up changes came, the original founder and bassist left. 16-year old Piotr Przybylski took his place. Andrzej ?ys?w joined as second guitarist, and the singer was changed once again. Since then Turbo's vocals are handled by Grzegorz Kupczyk, one of the most famous Polish heavy metal singers, sometimes compared to Bruce Dickinson.

In 1982 the first LP was released, entitled Doros?e Dzieci (Grown-up Children). The music it contains is a blend of traditional hard rock and nwobhm. The title track has become a hit and most recognizable Turbo song. Having the LP recorded, the group kept playing extensively, amongst others at Rockowisko in ??d? and the famous Jarocin festival. Despite the success, the line-up kept changing, the drummers were consequently after another: Marek Olszak, Ryszard Oleksy and Przemys?aw Pahl. Finally, the drummer's place was taken by Alan Sors. Piotr Przybylski (bass) left, and was replaced Bogusz Rutkiewicz.

Having troubles completing the line-up, the band would have to deal with some other difficulties. The record company would isist on softening the band's sound and recording more 'catchy' tracks. Wojciech Hoffman later called that 'a time of mistakes and distortion'. Due to the insists in 1985 a compromise, softened LP Smak Ciszy (The Taste of Silence) was recorded. Despite the sound being relatively soft, the riffing resembles Iron Maiden, and the vocals give the music more heaviness. The charting songs were Smak Ciszy and Jaki by? ten dzie? (How That Day Was).

A year later Turbo recorded a LP, that would become one of the best polish heavy metal acts of all time - Kawaleria Szatana (Satan's Cavalry). Heavy riffing, Maiden-like soloing and lyrics dealing with typlically 'heavy' themes such as death, war and pain completely changed the band's image. The LP was very much successful and still is considered to be the groups' greatest effort. After the release Turbo went to collaborate with Metal Mind Records, what enabled then to play at the cult Metalmania.

In 1987 the band did record another LP, Ostatni Wojownik (The Last Warrior, an English version was released as well in Europe a year later). It was a debut for the new drummer - Tomasz Goehs. The band's style hardened even more, ifluenced by early Metallica - so did the lyrics, even darker than before. In 1989 the first live recording Alive! was released, containing material recorded at two gigs 30.12.1986 and 3.03.1987.

In 1990 a break-up occurred, when Grzegorz Kupczyk and Andrzej ?ys?w quit the band. Tomasz Olszewski joined on bass, and the new singer was Robert Friedrich. This line-up went on, creating Dead End which resembles somewhat of death metal, but the songs' structures are still thrash. The break-up and lack of concerts would cause the band's inactivity. A compilation of 1980-1990 songs was released, containing tracks unreleased before. Wojciech Hoffman tried to form a new line-up in 1991, releasing One Way (tapes only), but the effort turned out to be a commercial loss and Turbo finally ceased.

The following years, several compilation albums were released - in 1992 Titanic, with unreleased songs from the 'softened times', and a year later Doros?e Dzieci i inne ballady (Grown-up Children and other ballads) - a collection of all Turbo ballads.

In 1995 Turbo played at a gig in Pozna?, the line-up being Wojciech Hoffmann, Grzegorz Kupczyk, Bogusz Rutkiewicz together with Marcin Bia?o?yk ? guitar and Szymon Ziomkowski ? drums. The applause caused the group to reform, and 1.01.1996 Turbo regrouped. In 1997 another compilation was released, this time entitled Intro: 1982-1996, composed of most popular songs. In 1999 Metal Mind Records released a Turbo discography on CD. The band played at Thrash'em All and Metalmania festivals. In 2000 a remastered version of Titanic was released, called Remix '92. On 20.01.2000 Turbo played at a gig celebrating Grzegorz Kupczyk's 25-year activity on stage. The gig was released as a CD 20012000'.

With 2001 came another LP, after a ten-year silence. Awatar (The Avatar) was an experimental, new-sound album, influenced by modern hard rock. The experiments were disapproved by the heavy metal die-hards, who rated the album very low. The line-up formed was Hoffmann, Kupczyk i Rutkiewicz and Mariusz Bobkowski - drums.

In 2004 Turbo are back (Wojciech Hoffmann, Grzegorz Kupczyk, Bogusz Rutkiewicz and Tomek Krzy?aniak ? drums i Dominik Jokiel ? guitar). The To?samo?? (Identity) LP was released, being a come-back of pure heavy metal. The die-hard public consider it to be an excellend come-back, while others claim the group to be repetitive. In 2005 a limited edition of To?samo?? together with Akustycznie (a record of the acoustic performance XII 2003) came out. The band went to Metalmania and released the gig as a live DVD.

During to un-solved problems with the record company coming out, and a bad music-market situation, the band ceased once again. Wojciech Hoffman went on a solo career, Grzegorz Kupczyk worked with his band CETI, and Bogusz Rutkiewicz joined Gotham. In March/April 2007 the group took part in Metal Marathon Tour 3, together with Chainsaw - being Turbo's first tour since 2001.

2) Turbo is a Hungarian garage rock/psychadelic rock band. You will find the Hungarian Turbo under Turbo!.

Turbo was born in 2005 from the four founding members' love of rock and roll. The members are known from earlier hungarian musical enterprises (e.g. Fresh Fabrik, Warpigs, The Carbonfools, Freedom Republic). The goal of the band is to convey a true rock experience and it works accordingly. If the band cannot complete this single mission, it will disband and fade away.

By spring 2007 the band completed their first EP christened? Boarman Session?. The tile derives trivially from the name of a small town near N?rnberg where the material had been recorded (Ebermannstadt).
During summer 2007 Jero joined the band on bass (ex-R&eacute;member) whose contribution is an additional energy supply.

At the beginning of 2008 a new drummer, Delov J?vor arrived. His rock spirit and jazz training are the last refinements on the Turbo formula. During summer 2008 the band recorded their first LP to be released in January 2009.

In January 2009 the Turbo performed at the famous EuroSonic Festival in Groningen.

4) Turbo (??) was a Korean dance pop duo. With Kim Jong Kook doing his characteristic high pitched singing and Kim Jung Nam (Jn) providing the rap, Turbo released their first album in 1995. They released a second album in 1996 before Jung Nam left the duo because of management issue. Jung Nam was replaced by Mikey and in 1997 the third Turbo album, Born Again, was released. Turbo discontinued as a group after making a 5th album in 2000, as Jong Kook had accepted an offer to go solo. Famous songs include " Goodbye yesterday", "Black cat" and many more. Songs produced are dance-like tracks. Similar to that of Koyote and Typhoon.

7) Turbo is an independent hip-hop artist known for his songs based on characters from the popular video game series "Street Fighter." He performs the songs under the alias "Balrog," the Boxer in "Street Fighter II."

9) Turbo was a heavy metal band from the town of Kranj, Slovenia. The band has released two full-length studio albums, "The Power of Metal" (1995) and "A Glimpse of Home" (1997). Zanil Zak Tataj, former vocalist of the hard rock band Divlje Jagode, appeared as the singer on both Turbo's studio albums.