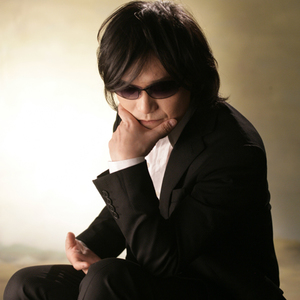 Toshi is a healing music artist and a current lead singer of a legendary Japanese rock band X JAPAN. ?? was born in 1965 in Tateyama, Chiba, Japan. Toshi has a very beautiful voice that goes over about three octaves. ?? started his solo career in 1993 when he was still an active member of X JAPAN before their Last Live. Toshi left X Japan in 1997. In the same year, he released an album, "Beautiful Love Song" , which showed a change of his music style, from a rock star to a healing music artist.

Toshi left X Japan in 1997. In the same year, he released an album, "Beautiful Love Song" , which showed a change of his music style, from a rock star to a healing music artist. Toshi also started giving more than 2,500 concerts at such places as concert halls, schools, various local events, etc. all over Japan on a tour called "Uta tabi". Along with these regular concerts, he also held charitable concerts at facilities such as homes for the old, the handicapped and the abused children, prisons, reformatories, hospices, and similar institutions, since 2001, which numbered more than 8,000 places where he gave heartfelt healing moments to a great number of audiences. Such steady and honest activities of Toshi were often taken up by the media.

Having continuously performed songs composed by MASAYA, which Toshi happened to find and felt deeply healed while he was in difficult times, for the people of all walks of life and and in various situations, he says, "I have seen so many people shed tears to hear my songs for as long as 8 years, and I sincerely feel it is such a blessing and a great pleasure for me. I think, to heal other people is to heal myself." Toshi ended his 8-year-long nationwide tour of Utatabi in the spring of 2007, and started doing major activities as a healing music artist.

In October 22, 2007, there was an announcement of a reunion of X JAPAN. Toshi joined the group's 3 consecutive shows held in the last days of March, '08 at Tokyo Dome where 150,000 fans gathered from over the world.

Toshi released special best albums of the healing music which recorded his footsteps of the past 10 years and consecutively released such albums as "EARTH IN THE DARK - to the blue sky", "ERA (JIDAI)" and "Beautiful World".

Having a similar theme to such beautiful healing music, but as a rather different music style, Toshi organized a new band called "Toshi with T-EARTH" in June, '08. Its sound is based on 70's hard rock with shouts of Eco messages on it, in short, a fusion of Eco and Hard Rock. The band made a debue performance at Busan Rock Festival in South Korea and made a successful concert tour in the major cities of Japan in summer. It is also scheduled that they will visit Brazil and Chile for concerts in October. Toshi's message, "Heal the earth, heal the children." will go beyond national boundaries and reach the hearts of millions of people in the world.

Earth in the Dark - Leaving for the Blue Sky