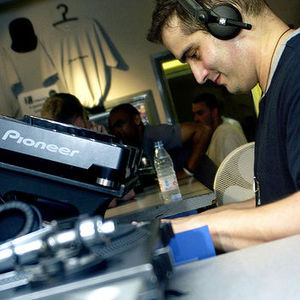 House producer from New Jersey born in 1972. The sound of Todd Edwards is characterised by an hypnotic collage of short cut-up samples over swung US garage beats and lively disco flavoured bass-lines. He started his musical career around 1992-93. Influenced by Marc Kinchen, whose 'MK' remixes were very popular to feature vocal reconstructions ('Push The Feeling On' by Nightcrawlers, The, 'Can You Forgive Her' by the Pet Shop Boys among others).

Credited as one of the godfathers of UK speed garage, Edwards is also a committed Christian and often mention 'Jesus' and 'God' as his primary sources of inspiration. He has been an example for a lot of artists, from MJ Cole and Burial, to Daft Punk and Akufen.
Todd has an impressive list of remixes for hundreds of artists like Wildchild, St Germain, Nicole J McCloud, Mad Moses, Robin S., Dimitri from Paris, and Benjamin Diamond. His way of work is to cut up between 50 to 75 samples (especially gospel, r&b, disco flavoured ones) and dispose them on various patterns with the actual vocals on top.
Sometimes, small 'hidden' messages are heard throughout his tracks. They commonly refer to 'Jesus' and love. According to him, the weirdest sample he used was his father's voice on 'Saved My Life' (1995).
His own releases were generally praised and played to enthusiast crowds all over the world: "Prima Edizione" (1999), the "Full On" and "New Trends Sounds" series contributed to his success. In 2006, he released his first full length vocal album called "Odyssey", a musical adventure that will take you through an uplifting ride.

Fire and Be Damned