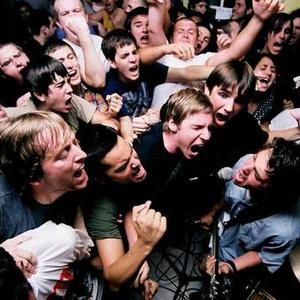 Title Fight is a band from Kingston, Pennsylvania, USA formed in 2003 that combines elements of punk, melodic hardcore, pop punk, and emo. They are currently signed to Side One Dummy records and will be embarking on their first headlining cross-country summer tour starting May 19th. They released a new 3-song 7" The Last Thing You Forget on June 23rd, as well as a CD released on July 10th, compiling all of their releases to date: 2007's split CD with The Erection Kids and 2008's Kingston EP (available on iTunes), both released on Flight Plan Records.

The CD also includes the previously unreleased songs "Western Haikus," "Introvert," "Symmetry," and "No One Stays at the Top Forever." Their first full-length, Shed, came out on May 3rd, 2011.
The new album "Floral Green" came out on September 18th, 2012 on Side One Dummy.

Title Fight's 2005 and 2006 EPs can be downloaded for free on their myspace page.

The Last Thing You Forget