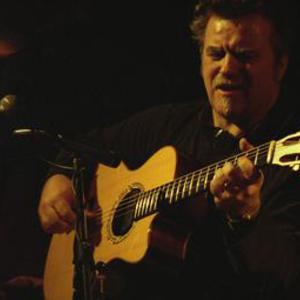 Born in Winston-Salem, North Carolina, Tim Sparks started picking out tunes by ear on an old Stella flat top during a bout of encephalitis that kept him out of school for a year. He taught himself to play the music he heard around him: traditional country blues and the gospel his grandmother played on piano in a small church in the Blue Ridge Mountains. At age 14, Tim was nominated by a musically astute uncle for a scholarship at the prestigious North Carolina School of the Arts.

At age 14, Tim was nominated by a musically astute uncle for a scholarship at the prestigious North Carolina School of the Arts. There he studied the classics with Segovia protege Jesus Silva while continuing to play all kinds of music, increasingly turning to classic jazz for inspiration. He adapted compositions by Jelly Roll Morton, Scott Joplin, and Fats Waller to the guitar, frequently reducing piano arrangements to their essence. Early influences were Doc Watson, Arthur Smith, and most importantly Duck Baker, who opened up a horizon of possibilities for fingerstyle guitar.

After a stint on the road with a Chicago-based rhythm and blues band, Sparks arrived in Minnesota where he soon established himself as a journeyman guitarist and session player. While recording three albums with the seminal vocal jazz ensemble Rio Nido, Sparks also became proficient in jazz styles from Brazilian to Be Bop. It was at this time he arranged Carla Bley's composition "Jesus Maria" for Leo Kottke. ( Rio Nido's first two vinyl recordings have recently been re-issued on CD on the Japanese Vivid Sound Label. Check out Rio Nido

Sparks also found time to revive his interest in classical music, adapting Tchaikovsky's Nutcracker Suite to the guitar, a work that has been cited as a significant contribution to solo guitar literature. For Sparks it was a labor of love that earned him the National Fingerstyle Guitar Championship in Winfield, Kansas in 1993.

A sojourn abroad inspired his interest in European and Mediterranean styles, particularly the music of the Balkans. Upon his return to Minnesota, Sparks immersed himself in the ethnic music scene, performing on Oud and Saz in Middle Eastern ensembles and playing guitar in Greek, Klezmer, and Sephardic groups. This work culminated in the recording of Sparks' Balkan Dreams Suite, a remarkable collection of odd-meter guitar arrangements. Many of the Balkan Dreams compositions were recorded on Tim's debut solo CD, The Nutcracker Suite, in 1993. This recording was hailed by Guitar Player Magazine as "an exhilarating, odd-meter minefield inspired by Near Eastern music" and "an important recording from a gifted composer, arranger, and performer." Two more releases followed on the Acoustic Music label, Guitar Bazaar (1997) and One String Leads To Another (1999).

Sparks' work came to the attention of John Zorn, the saxophonist, composer, and curator of Tzadik Records in New York and thereby led to a new cycle of compositions inspired by traditional Jewish melodies. Neshamah (1999) is a solo effort. Tanz, which garnered Downbeat Magazine's highest praise, five stars, in 2000 and At the Rebbe's Table (2002) include ensemble work. All three releases have been acclaimed by a broad spectrum of critics and listeners alike. Spring of 2003 saw the release of Masada Guitars, featuring interpretations of John Zorn's music by Tim, Bill Frisell, and Marc Ribot. In recent years, Sparks' musical focus has come full circle, returning to the country blues and classic jazz that served as a springboard for his worldwide guitar explorations. He toured with Dolly Parton in 2005 and recorded Roots, Rags and Blues for Truefire/AGW.

In 2008 he recorded Sidewalk Blues, a solo fingerpicking homage to Blues, Rags, Early Jazz and Gospel Americana from the early 20th century.

In 2009 he reunited with Greg Cohen and Cyro Baptista to record Little Princess, a Jazz World-Fusion exploration of the music of Klezmer legend Naftule Brandwein.

Review by Thom Jurek
Acoustic fingerstyle guitarist Tim Sparks has always set himself apart from the pack of his peers. Rather than rely strictly on playing blues or age-old folk and bluegrass tunes, or even following in the well-worn paths of John Fahey, Peter Lang, and Robbie Basho, Sparks has followed his muse down into the corridors of musical and cultural history. While no one can dent the influence of great jazzmen on his playing, one can hear the sounds of saxophonists, pianists, and of course the sounds of Yiddish folk and popular music, klezmer among them. In 2000, Sparks recorded Tanz, his second album for John Zorn's Tzadik imprint. It was a departure from his previous two in that it wasn't a solo but a trio record. His partners on that musical journey were veteran bassist Greg Cohen and master percussionist Cyro Baptista. The set was brilliant and innovative, creating an entirely new perspective on Jewish music from the beginning of the 20th century to the commencement of the 21st. It contained a slew of traditional songs and also featured four tunes by the original klezmer legend, clarinetist and composer Naftule Brandwein. The same trio reconvened in 2002 for At the Rebbe's Table, for a similar program that also contained tunes by Brandwein. Seven long years later, this trio once more reunites to perform an entire program of his work, and the results are quite astonishing.

For starters, here are the group members playing together after all this time and being more emotionally and musically attuned to one another than ever before. Next there is Sparks' own playing, which was always jaw-dropping, but has risen to a such a level that now he's virtually in a league of his own. The way he combines so many different musical techniques and genres into his own idiosyncratic fingerstyle picking is not only technically remarkable, it's savvy and wildly creative at the same time. Check the way he weaves flamenco styles into Brandwein's take on a traditional Yiddish folk melody in "Der Yid in Jerusalem." Here, Baptista accents the Latin rhythms on claves and hand drums, and Sparks weaves Charlie Christian, Tal Farlow, and elements of Carlos Montoya into his playing of Brandwein's melody. The sprightly "Oh Daddy, That's Good" weaves some gorgeous modal and overtone playing into the melody, stretching the harmony to -- but never over -- the breaking point. The interplay between Cohen and Baptista is so delightfully sophisticated that all the listener can do is smile. The use of harmonics in "A Few Bowls Terkish" (sic) draws from the influence of guitarist Bert Jansch to further a series of modal interludes that flow into some gorgeous jazz playing on the changes by the composer. Highlighting these tracks doesn't mean that they are the album's finest moments at all. Virtually every one of these ten cuts is an example of how intuitive, sophisticated, and creative Sparks is, not only as a player and interpreter, but as an arranger so canny that the listener would think all of these songs were written in the current era. That said, Sparks never, ever compromises the sophistication or humor Brandwein put into his compositions. He reveres them deeply, and strives to make them live on as part of a lineage that has no use for musty audio museums, but would rather portray the music as a living, breathing, sassy, sexy thing that swaggers rather than stands still in the passage of time. Brilliant work and the best Sparks record to date.

One String Leads To Another