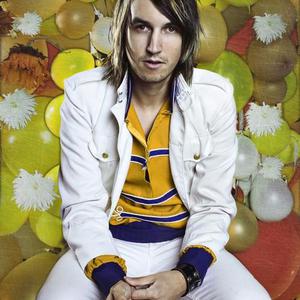 The music of 23 year-old Tim Myers is becoming a genre in and of itself. And with six recognizable tracks in over ten National Campaigns including TARGET, SATURN, ABC TV, and JC PENNEY, Myers has already gained a prominent presence in American Households. It's nearly impossible to turn on a TV and not hear the catchy, endearing, downright addicting melodies and hooks of the Southern Californian singer/songwriter.

Myers' soon-to-be-launched debut solo album will have its pick from over one hundred and fifty tracks, which he has compiled in the last year. Recently, iTunes release of Myers' ?The Good Life EP? was highly successful in presenting his carefree tunes, ?A Beautiful World? and ?The Good Life? .

Myers' music has also been licensed by various TV shows and films such as Hotel For Dogs , The Waterhorse: Legend Of The Deep, ABC's Greys Anatomy, Private Practice, The CW's One Tree Hill, and Lifetime's Army Wives, along many others. Myers' songs have also contributed to the production of various independent films. Tim Myers has impacted the television world like no other independent artist in history.

Music has been the driving force for Tim from a very young age. Being compelled by piano at age five, guitar and bass were introduced to him shortly after. At eighteen, he joined the Platinum selling band OneRepublic. Myers entered the studio with the group, writing and performing on their debut record, ?Dreaming Out Loud? , prior to leaving the band a few years later to embark on his solo career. Writing credits for the OneRepublic record include the Billboard hit single "Stop and Stare" as well as "All We Are", "Someone To Save You", and "Prodigal".

A true songwriter and visionary, Tim Myers does more than write ?good' songs. He creates synergy between him and the listener by evoking intimately warm, fresh and cheerful emotions. He finds influence in music's greatest songwriters; John Lennon, Paul McCartney, and Bob Dylan. By also seeking inspiration from The Beatles' catchy melodic rhythm and lyrics, a touch of The Beach Boys-esque harmonies, while infusing his own modern twist, Myers has introduced a unique style of songwriting to the world. While he has become known for his encouraging messages and explosive choruses with tracks like ?The Good Life? and ?Brand New Day? , Myers also reaches deeper with songs such as "I Can't Go On Living Without You", "Remember When (featuring Schuyler Fisk)? and "This is Love". Although these tracks have yet to receive as much recognition in advertisements and television, they clearly have the power to connect with people on an organic and human level. A writer and poet, Myers also often finds inspiration from America's most prominent authors and poets like Charles Bukowski, T.S. Elliot, C.S. Lewis, George Orwell, and Ralph Waldo Emerson. ,

While major record labels and music companies are now making significant amendments to their business models to appease the rise of unsigned artists through the digital movement, Tim Myers has unintentionally paved a new path for all unsigned artists. His exposure has been amplified by television and film, similar to the way radio has been a driving force for the major label artist.

Aside from working on his own music, he continues to produce, write and collaborate with several other noted artists such as Tyrone Wells (Universal/Republic), Lindsey Ray (Original Signal), Days Difference (Universal/Motown), Mozella (Universal/Motown), Mitchel Musso (Disney), Schuyler Fisk (Independent) among many others.

With his notable success and consistent yet unique songwriting, Tim Myers will continue to make a strong impact as an artist in the constantly evolving music industry.