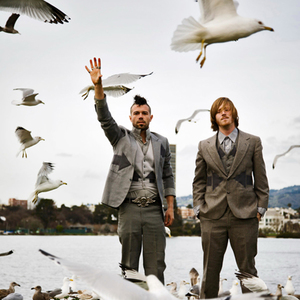 themselves are Doseone and Jel, from California. Jel became familiar with dose through his good friend and radio partner, Kevin Beacham. But it wasn't until early 1998 when some tapes were exchanged through mutual friend, Mr. Dibbs, that the two realized their potential together. Soon after a few phone conversations, jel started making frequent sojourns from Chicago to Cincinnati to record with dose.

Jel became familiar with dose through his good friend and radio partner, Kevin Beacham. But it wasn't until early 1998 when some tapes were exchanged through mutual friend, Mr. Dibbs, that the two realized their potential together. Soon after a few phone conversations, jel started making frequent sojourns from Chicago to Cincinnati to record with dose. The duo's first couple of tracks ended up on dose's first, self-released record Hemispheres (1998). Then from April of 1998 to January of 1999 they solidified their chemistry, putting the tracks together that would end up on themselves' Them. That same Spring dose and jel, along with Slug of Atmosphere and Sole and Alias of Live Poets began recording Deep Puddle Dynamics's The Taste Of Rain... Why Kneel. Out of that record, the concept of Anticon was somewhere born -- whose founding dose and jel would become an integral part of, later bringing them both to the Bay Area.

Since then, both artists have continued to push boundaries, producing and collaborating on a range of work far outside the constructs of traditional genre forms. They've expanded their use and understanding of their equipment, as well as perfected their live performances. Their record, the no music. (2002), involved the use of: an SP-1200, an MPC-2000, a Korg Poly 64 keyboard, some other shit, a Roland VS 880, Digital Performer, a Dr. Sample, various microphones, numerous household items and found objects and sounds. Recently the two of them have also expanded their roles in the group, both contributing vocals and production to the no music.. They also added Dax Pierson on keyboards, Dr. Sample, Theremin and back up vocals on many of their tracks, and to all of their live performances. Dax is essential in adding syncopation and a real time quality to the tracks.
After a six-year hiatus, Themselves return on a rampage of heady rap wrung from hardworking hands. Of course, the duo of Jeffrey ?Jel? Logan and Adam ?Doseone? Drucker are never too far from the frontlines of good art and honest music. Last year, their Subtle sextet released its third album, the critically acclaimed and wildly adventurous ExitingARM, and a 2005 collaboration with Germany's the Notwist yielded the cult gem 13 & God. There have been solo offerings, guest appearances, and ceaseless touring, but not peep from the name behind 2002's left-field classic The No Music. That blessed interim has seen Doseone and Jel become the fearless musicians and exacting artists they'd always meant to be. Now, hungrier than ever, Themselves are here to scrawl a bold new chapter across rap's too-stale tome. Furthermore, they set out to accomplish this feat unadorned, returning to hip-hop's most cardinal and carnal form, the number two: the DJ and the MC?neck-snapping beats and precision prose?accompanied by a little righteous indignation, of course.

Such things do have roots, naturally, and Themselves' are as colorful as one would expect. Drucker was born in Napa, Idaho, to a hippie pair whose relationship wouldn't outlast its ideals. Logan was raised in Chicago by Pentecostal parents. While the former spent his preteen years bouncing between Philadelphia and New Jersey, surviving by his mile-a-minute wit and ceaseless imagination, Logan nursed an early love for the decidedly safe sounds of Chuck Berry into raging crush on the unhinged backbone of rap music: beats. He'd pump gas in order to save up for the hallowed SP-1200 drum machine (of which he's now a renowned master); Drucker would hone his unmatched rap styles in street battles before moving to Cincinnati in his late teens. In that city's annual ?Scribble Jam? competition, as ?Doseone,? he famously battled Eminem in a final-round showdown?as well as one of his idols, Freestyle Fellowship's P.E.A.C.E.?and the experience left him hollow. Meanwhile, Jel had forged a sound unto himself, but couldn't find a voice able to keep pace. In 1998, tapes were exchanged through the venerable DJ Mr. Dibbs, and history came to be made.

Of that initial meeting, much would be born: Doseone's ambitious, self-released debut Hemispheres (1998); Themselves' seminal unveiling, Them (1999); the landmark collaborative project, Deep Puddle Dynamics (also featuring Sole, Alias and Atmosphere's Slug); and the Anticon label itself. Soon, Dose and Jel moved to Oakland in order to spark a movement with Anticon's other co-founders, two of which (Odd Nosdam, and Yoni Wolf of WHY?) were in yet another celebrated group with Drucker, the eternally lauded cLOUDDEAD. Since, Doseone and Jel have continued to challenge rap?and our conception of music itself?every step of the way. Through their joint projects and an impressive body of solo work (see 2006's Soft Money, by Jel, or Doseone's self-released spoken-word album, Soft Skulls), these two have been nurturing the kind of legacy that only gets better with age. In 2009, Themselves return to a core that's been warming, strengthening, and expanding all the while.