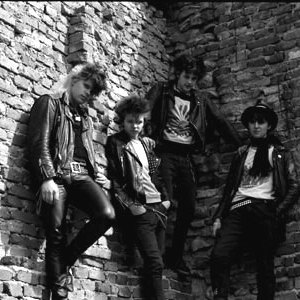 1) Appendix is a hardcore punk band, formed in the early 80's in Pori, Finland. Appendix was one of the major bands from Propaganda Records. Their issues were sold worldwidely. The first singer Olli formed band called Y&ouml;, which exists still on the finnish TOP10-charts. The band broke up in 1985, but they released "Suomineito"-minialbum in 1996. New album "Syyntakeeton" was released in 2006. In 2006 was re-issued as well "Top of The Pops" vinyl-LP. The latest CD-compilations are "Parock" and "Ei raha oo... Diagnosis". They still appear together.

The line-up on the album EI RAHA OO MUN VALUUTTAA was: Mikki ? voice, Vesku ? drums, Jaska ? guitars, Tomi ? bass.
Tomi is nowadays as a leader of the another finnish cellphone company.
Nowadays they play great shows and got need blood in the band, if I may say so. The first Appendix guitarist, A.Impola is back after 29 years. They Rock!!!

2) Appendix is also a Dutch punk rock band. They are still active!
They started in 2003 in a squatting house, got boo-ed from the stage on a high school party in 2004 and they are rocking every place since 2005. Recorded their first demo by themselves in 2005, the first ?real' demo was recorded at the end of 2006. In 2007 the band was on the first album of the ?Life Fast Die!'-series from the Belgium label Kickass Records and since January 2009 their single-cd Nine is available at all their shows.

In April 2010 Arjan decided, after six years of rocking the drums, to quit the band. Playing his last show at the 9th edition of their own Hoefslag Festival. After a very short search the band found a new drummer. Igino is his name, he's married and a father of a little boy. And... from now on the drummer of Appendix, making the band complete again.

Appendix is a band that likes to perform on stage and got quite some experience doing it. Small pubs or big festivals, the guys from Appendix dont care. As long as they can rock!

4) Appendix was a Norwegian rap group from 2003-2008. The group consists of the two members Hank Nova and H-Pak.