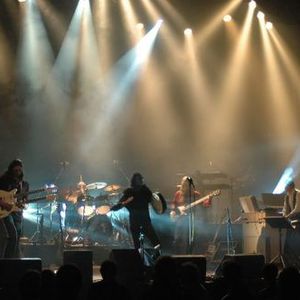 The Watch is a 5-piece band from Milan, Italy. Born from the ashes of The Night Watch, they began to work in a more professional way with the release of Ghost in 2001, the album that introduced them to prog audiences. Today, The Watch are a well-known act in the prog community and are definitely appreciated. Their music is inspired by artists of the 70's, primarily early Genesis, owing to an incredible similarity between Simone Rossetti's vocals and those of a younger Peter Gabriel.

Despite this similarity, however, the band has its own style, combining classical prog atmospheres with a sprinkling of modernity.
During interviews, the guys are often asked how they manage to attain such a high production level both in-studio and on stage. They like to say that they simply try to compose nice songs and nothing more.
The Watch's 2004 effort, Vacuum, instantly received excellent reviews. With its release in November 2004, The Vacuum Tour took off, bringing the band to perform in several European countries as well as in the U.S.A.. 2007 saw the release of Primitive, which marks the return to the origin of progressive music. A long tour in Europe followed the release of this album and the band decided to add some covers from Genesis to the shows. The undoubtedly similarities between Rossetti's and Peter Gabriel's voices and the great success of the performances brought The Watch to the decision of building up a tour based on some early Genesis's successes, such as Trespass, Nursery Cryme and Foxtrot.
In 2010 the band released a new album called "Planet Earth?" which saw the contribution of John Hackett on flute. Together with this album a long tour started touching Europe, USA and Canada.

Tracks From The Alps