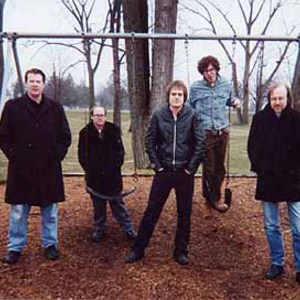 Born in and around the Motor City in 1988, the Volebeats formed due to a mutual boredom of and displeasure for trendy bands and music. Starting as an acoustic outfit, lead guitarist/vocalist Matthew Smith and vocalist/guitarist Jeff Oakes began writing songs with Terry Rohm and Jeff's brother Al. With Keir McDonald (from Detroit's Medusa Cyclone) on drums, the Volebeats began performing on street corners throughout the Detroit suburbs.

For the first few years of its existence, the band had a revolving group of musicians that included another Oakes brother, Brian, on upright bass, drummer Mike Murphy and guitarist Mark Niemenski (both from another Detroit band Hysteric Narcotics), drummer Bill Peterson, and Rebecca Kaplan on fiddle. Fusing hardcore country and folk music with a melodic pop flair and rock & roll sensibility, the Volebeats released their debut Ain't No Joke on Relapse Records in 1989, with current guitarist and songwriter Bob McCreedy -- who had played with Oakes in the Frames in 1981 -- joining the group shortly thereafter. Over the next few years they recorded a single for Icon Records and could be found on various compilations. Then in 1994, the Volebeats signed with the Safe House label, releasing their second full-length, Up North, which garnered the group critical acclaim. A six-song EP, Bittersweet, was released in 1995 and featured a cover of Barry White's "I'm Gonna Love You Just a Little More, Baby." With drummer Scott Michalski and bassist Russell Ledford joining the band, the Volebeats' lineup was solidified as the group entered the studio to record its 1997 release, The Sky and the Ocean. Two years later, the group issued Solitude, and their 2001 release, Mosquito Spiral, featured pop and psych influences that recalled Medusa Cyclone and Smith's other band, Outrageous Cherry. Those influences were also present on their 2003 release for a new label Turquoise Mountain, Country Favorites. The group, which after the departure of {Bob McCreedy} consisted of Jeff Oakes, Russell Ledford, John Nash, Scott Michalski and Matt Smith, next released Like Her in June of 2005