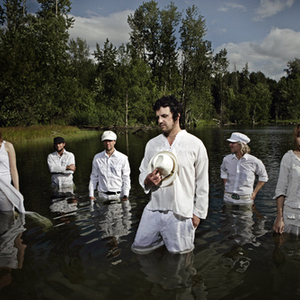 THE UPSIDEDOWN is an American rock band based in Portland, Oregon. Comparisons to The Jesus and Mary Chain, Echo and The Bunnymen, and Love and Rockets reflect on the band's influences, but The Upsidedown's sound is something all their own. Music from The Upsidedown seems to be a product of their Pacific Northwest environment? dark, atmospheric, moody and romantic with the occasional volcanic explosions.

Formed in 2003 from the remnants of local shoegazer cult favorites The Bella Low, the group released its debut LP, ?Trust Electricity? on Reverb Records in 2004. The record turned some critical ears in the industry. MAGNET featured them in the current ?Band to Watch? article, and The Boston Globe described their music as - ?dreamy and decadent in all the right places". The six-piece soon began making a name for itself in the Northwest, and the press continued to take notice: ?The Upsidedown create a psychedelic sound with all the hazy swirl and tambourines one would expect...and carries layers of sonic fog and grit. The sound is textured, and the performances polished.? - The Oregonian . ?The Upsidedown is a diligent band that's been around the Portland block and paid their dues. Let's relish the last moments of this band's locality before they are stolen from us" - The Portland Mercury

The Upsidedown's second full-length studio album, ?Human Destination?, recorded at The Dandy Warhols' Odditorium, was released on the Warhols' new label, Beat The World Records in 2008. The Odditorium provided The Upsidedown an environment conducive to making a complete, fully engaged record, playful and smart, and as energetic as their celebrated live shows. The musical landscape is as vast as it is familiar and warm. Several tracks from ?Human Destination? were featured on the NBC TV series "Trauma", and the FX series' "Sons Of Anarchy" and "Greek" in 2009. Again in 2010 their music garnered more television placements including the popular HBO series ?True Blood? and the FOX CW series' ?The Vampire Diaries? and ?Life Unexpected?

The Upsidedown's third full-length studio album, ?The Town with Bad Wiring? will be released on the Reverb Records label September 28, 2010. The new album features a heavy hitter list of friends including the likes of R.E.M.'s Peter Buck, The Brian Jonestown Massacre's Colin Hegna (who also did the majority of engineering), and The Dandy Warhol's Peter Holmstrom. The 12 individual tracks on the record are without doubt the most provocative, psychedelic, sexy, rock songs The Upsidedown has recorded...so far.

Part of the closely-knit Portland music community, The Upsidedown have performed with Black Rebel Motorcycle Club, The Raveonettes, The Jesus and Mary Chain, Richard Butler, The Duke Spirit, The Black Angels, Colin Meloy, The Dears, and The Walkmen. In the fall of 2008 they joined label mates The Dandy Warhols on their coast to coast U.S. and Canada tour.

In 2009, Jason Anchondo from Los Angeles joined the band (percussion/keys, formerly in The Warlocks, and Spindrift), completing the current line-up

The Town With Bad Wiring