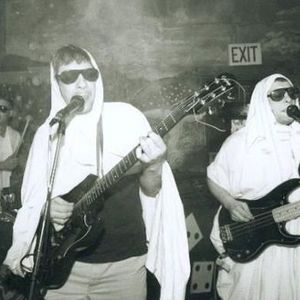 The Spits are a Seattle-based punk musical group. Currently, the band has released five* albums, all officially self-titled but unofficially titled 1, 2, 3, Vol. IV, V released by Nickel and Dime Records, Slovenly Recordings, Dirtnap Records, and their own label Thriftstore Records, respectively. They have also released one 7" single, 19 Million A.C., and a split 7" with The Briefs, both on Dirtnap.

The band describes itself as "Punk for the People", and focuses on loud, noisy, and dirty punk rock. Band members frequently appear in costumes on stage (e.g. graduation robes, reagan masks, or toilet paper "mummy" costumes), and focus on the dirty, low-budget sound and presentation of garage punk.