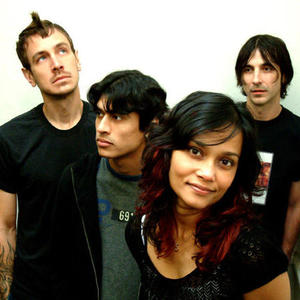 Born and raised in Los Angeles, California The Slow Signal Fade is an indie alt. rock pop band that has been turning out it's own brand of New Shoegaze / California Psychedelia since 2003. Assembled together thru an array of failed alliances, random acquaintances, happenstance, & numerous ads in local L.A. classifieds like The Recycler, Craigslist, and Music Connection, TheSSF have steadfastly played their way into the hearts & minds of folks around the U.S. and beyond with their numerous van tours throughout the country, as well as with the release of their two CD E.

.'s, 2003's ?Kindling E.P.? & 2004's ?Through The Opaque Air? as well as their first full-length LP "Steady". Armed with a vast array of esoteric and sometimes conflicting influences they have crafted a potent sound that is all their own. Glimmering with the musical aspects of classic rock like Led Zeppelin, Pink Floyd, The Doors, Jefferson Airplane and early Heart, they have combined that with the post-punk of bands like The Cure, New Order, and Siouxsie & The Banshees and even mashed in a bit of the modern sonics of indie rockers ranging from Fugazi, to Low, to The Faith Healers, to Mogwai. This wide array of sound is created with the aid of Chris Walters on bass, Aaron Vishria on drums and Ron Ulicny on drums. On the vocal side of things, Sri Lankan born front woman, Marguerite Olivelle takes her cues from the likes of SARAH VAUGHN, Dinah Washington, Sinead O'Connor, Chrissie Hynde, Cat Power and the like. Former Rentals keyboardist Cherielynn Westrich was an early member of the band. It's this abstruse mixture that makes them so unique, a delicate blend of power & intimacy. TheSSF is a plethora of textured sounds, delayed guitars & sonic rhythms combined with clever lyrics and gauzy vocals. Never one to be concerned with writing the perfect 3 minute pop radio song, some songs are long, some are short, some are heavy, some are soft, some fast and some slow, a heavenly concoction of bliss commingling with a caterwaul of volume, if you will. The Slow Signal Fade are most at home when playing live, a tight, dynamic unit that will leave a lasting impression every time, a show of unconventional highs and fragile lows.

The band announced its break up in March 2007.

Through The Opaque Air