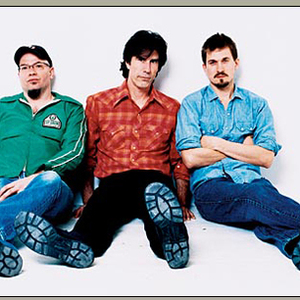 In 1985, when vocalist/guitarist/songwriter Walter Salas-Humara recorded a handful of tunes with the help of a dozen and a half friends and collected the songs under the title About Her Steps, he probably wasn't thinking that it was the start of a career in music that's now approaching 20 years and still going strong. No, at that point, he was too busy thinking about, among other things, names. "In the beginning, I didn't want to use my name because I thought it was too hard for people to deal with," explains Salas-Humara when discussing the origin of the Silos name.

"So I came up with a name that was two syllables, easy to roll of the tongue, and works in all languages more or less."

With a name in hand, as well as some (in his words) "unexpected interest" in About Her Steps, Salas-Humara put together a touring band. That line-up made Cuba, originally released in 1987, an exhilarating album that introduced the Silos' enviable ability to communicate effectively in both a whisper and a howl. Cuba attracted national attention. The video for "Tennessee Fire" was played by MTV and the band was voted "Best New American Band" by the Rolling Stone critic's poll. The band subsequently signed to RCA Records and the third album under the Silos name (self-titled, but often conveniently referred to as The One With The Bird On The Cover) was even better and led to an appearance on Late Night with David Letterman. Its spacious, organic quality made it seem out of place in 1990; however, looking back at the album from within the Alternative-Indy glow of the decade's end, The Silos resonates like the work of visionaries.

Since that landmark album, Salas-Humara has kept the Silos name alive with a continuing series of impassioned recordings and miles and miles of roadwork. Four Silos studio albums, Hasta La Victoria (1992) and Susan Across The Ocean (1994), Heater (1998). Laser Beam Next Door (2001), and When The Telephone Rings (2004) followed. The latest album, Come On Like The Fast Lane, is their most accomplished to date, mixing primitive rock, edgy psychedelia and down-home organic soul without reservation. Salas-Humara has also released several solo albums, produced several others for such kindred spirits as Michael Hall and Jim Roll, was a founding member of the seminal soul/drone band The Vulgar Boatmen, did some guest drumming on Hazeldine's Orphans, and joined Hall and Alejandro Escovedo in a two-off named The Setters. Ira Robbins, writing in The Trouser Press Record Guide, describes Salas-Humara as an "unflashy auteur whose alt-rock amalgam drapes country, punk, baroque stateliness and pop in an abiding sadness." When you look at Salas-Humara's wide-ranging career and his dedication to the art of songwriting, it's definitely not a stretch to include his name alongside the likes of Escovedo, REM, Lucinda Williams, Stephen Malkmus, and Neil Young.

These days, Salas-Humara is enjoying the stability of a Silos line-up that's been together longer than any other, closing in on nine years, with Drew Glackin on bass and lap steel and Konrad Meissner on drums. "We all enjoy each other's company quite a bit" is Salas-Humara's take on this longevity. "And stylistically, it all locks together in an interesting way. Visceral guitar playing combined with very melodic bass work and eclectic drumming works in a trio format. And to have the steel guitar (courtesy of Glackin) on the quieter songs adds a whole other dimension."

The Silos create a sound that's hard to pin down. According to Buzz McClain in The Washington Post, the band creates "powerful earthy pop that sounds like the result of Nirvana riding on R.E.M.'s tour bus." "The band's austere style inflects the astringent twang of The Velvet Underground with the drone of R.E.M. and adds countryish echoes that recall Gram Parsons," offered Stephen Holden in The New York Times. "We get compared to everybody," says Salas-Humara. "To some people, we're a country band. To other people, we're a rock band. To other people, we're an acoustic band. Some people think we're rootsy, and others think we're arty." He pauses to take a breath and to chuckle at the breadth of it all. "We're all of those things."

Yes, every one of those descriptions is accurate, a snapshot of the truth taken from a different angle. The music of Salas-Humara and his bandmates is the sound of ideas, styles, and maybe even cultures colliding. It deftly combines a big beat with a nothing-wasted leanness, and it's music that possesses a unique blending of intensity and approachability, with the ferocious rockers tilting you back on your heels just as quickly as the hushed, tightly coiled ballads draw you closer.

So how should one sum up the music of the Silos? With a new album on the shelves and a trail of memorable shows (from performances in large music halls to intimate house concerts) both behind them and in front of them, let's just call it enduring.

When The Telephone Rings