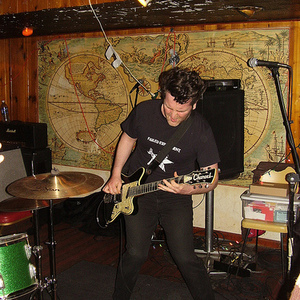 Brothers Frankie, Michael and Patrick O'Malley are The SAFES. Growing up, these sons of Irish immigrants were surrounded by music. Their father Frank O'Malley, a working musician, record collector and all around music lover, filled the house with live sounds, great records and an array of musical instruments. An environment ultimately that led to the development of this very special band. Having played in bands together and apart since they were kids, The Safes have that unique chemistry that comes when talented siblings form a band (think Kinks, CCR, AC/DC).

This chemistry fuels The Safes records as well as their live shows.

Since forming in 2003 The Safes have released their debut LP "Family Jewels" and follow-up EP "Boogie Woogie Rumble" to great success. Touring coast-to-coast The Safes have established loyal fanbases across the country on the strength of their live show which is a sweaty explosion of energy and melody. The quality of their first two releases has also brought The Safes national recognition. "Boogie Woogie Rumble" and "Family Jewels" have received favorable press in such notable publications as Rolling Stone, The Chicago Tribune, Washington Post, Kansas City Star, and numerous weeklies, fanzines, and e-zines. Those releases have also led to extensive airplay and live performances on college and community radio stations across the US such as WFMU, WLUW, KHDX, WMBR, among hundreds of others and along with Chicago powerhouses WXRT, Q101 and WLUP.

So what do we have here? I'll tell you what we have here! It's The Safes brand new LP "Well, Well, Well" and its dynamite! A fresh blast of pop rock'n'roll magic at it best, this album hits the spot again and again. Produced by Patrick O'Malley "Well, Well, Well" explodes with a supersonic crunch and stellar, sharp songwriting. The Safes give you 10 hit singles that make one killer record packed with stunning lyrics, electric energy, and hooks that hurt. One listen and you'll agree this album stands out in a crowd and shines bright and proud.

"This Chicago band of brothers apes early-Cheap Trick cover art and cut this atomic-pop EP in Detroit with Jim Diamond, the go-to-guy for modern garage heat. Everything else you need to know is in the song title "Mind Meltdown."
-Rolling Stone, David Fricke

?Boogie Woogie Rumble? is a lot like Radio Birdman: a riotous, tuneful, pre-punk/post-garage noise that sounds at once like the middle of the British Invasion and the advent of the Clash."
-Kansas City Star

"Hometown Hereos: The Safes
Their freight-train delivery and thoughtful arrangements- all delivered with a sneer- will remind you why garage rock is indeed an artform"
-Chicago Tribune

?Family Jewels? is an incredibly well paced and extremely well executed first record. We'll stay tuned to see if the Safes keep their jewels locked up, safe and sound or if they cash them in on some cheap tickets to fame and glory."
-Indie Workshop

?Some of the best pure pop for now people is being created by a bunch of brothers. Windy City boys The Safes are making a new name for its brand of hard driving melodies amongst the world-wide circuit of power-pop aficionados.?
?Art Voice

?The Safes seem to have captured in less than two minutes what Rivers Cuomo has been trying to capture for going on 10 years now. That is, perfectly crafted pop rock wonderfulness.?
-Centre Daily

Watch the video for "Since Trust Went Bust"
from The SAFES "Well, Well, Well"
directed by Andrew Maggio

Sight Of All Light (EP)