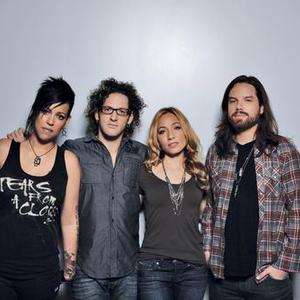 The Rescues are an American rock band from Los Angeles, California, formed in 2008. The members of the band, Kyler England, Rob Giles, Adrianne (full name Adrianne Gonzalez) and Gabriel Mann, are all singer-songwriters and multi-instrumentalists. The band released their first disc - a four song, self-titled EP - in March 2010. In June 2010 they released their first album "Let Loose The Horses". The most compelling artists have always been able to find their singular truth and channel it for the world to savor.

The most compelling artists have always been able to find their singular truth and channel it for the world to savor. But The Rescues ? whose music recalls the soaring emotions of Coldplay, the earthiness of Fleetwood Mac, the introspection of Death Cab for Cutie ? set themselves apart by combining each of their intrepid perspectives into one harmonious voice.

The Los Angeles-based foursome, who released their full-length debut, Let Loose the Horses, in June through Universal Republic, have made a name for themselves as a powerful live act thanks to their flawless, transcendent harmonies. They've likewise earned a rep for being TV's go-to soundtrackers with an uncanny ability to underscore drama on shows like One Tree Hill, Private Practice, and Grey's Anatomy, the latter boasting a staggering five Rescues songs, among them the rousing anthem ?Break Me Out.?

As individuals, the band members are moving performers, and together they are, beguilingly, more powerful than the sum of their parts. ?We all have very distinct, lead-singer voices,? notes vocalist/musician Kyler England. ?But when we sing together it's like there's a fifth person in the blend that comes together.?

England and fellow singers/multi-instrumentalists Rob Giles, Adrianne Gonzalez, and Gabriel Mann met while performing on the singer-songwriter circuit in L.A. They were regulars at Room 5 Lounge and The Hotel Caf?, which also hosted then up-and-comers such as Sara Bareilles, Katy Perry, and the Fray.

Though they didn't realize it then, these two guys and two girls ? each a fish-out-of-water in their Southern hometowns ? were united in their imperatives to move out West. North Carolina-native England was more of an alt-country artist; Gonzalez, from Miami, crafted folk-pop; and Texans Giles and Mann specialized in swelling rock and epic ballads. They'd occasionally share the stage, write a song, even tour together, but the idea of joining forces didn't dawn on them until a mutual friend suggested they collaborate.

So in 2008, England, Gonzalez, and Mann hammered out some harmony-driven songs and recorded the independent Crazy Ever After. The burgeoning group felt something was missing, so they recruited Giles a year later. ?That's when the band really happened,? says Mann. Sensing they were on to something great, the quartet didn't waste time: they began composing and recording, testing their chemistry during a month of intense songwriting. No song was written in the same way. Here, the band penned the bulk of what would be their major-label debut, Let Loose the Horses.

The title track came about after England's brother and his wife were forced to evacuate their home on a horse ranch in Colorado due to a brush fire. To save the animals' lives, the gates were opened so that the horses could run free to safety. The Rescues asked themselves, ?What would happen if you lost everything except for each other?? ?Let Loose the Horses? sets the tone for the rest of the album, which thoughtfully explores the crossroads where hope and peril meet. ?In our music, there's a balance between dark and light, tension and resolution,? Gonzalez says.

?The sound of this album and the fact that there is such variety comes from the fact that we're all writers challenging each other,? says Mann. Let Loose the Horses, in kind, teems with refined sonic restlessness: where ?Never Too Late? rises to a potent a capella bridge, ?Stay Over? tinkers, surprisingly, with synths, and ?We're OK? offers a slowed-down study in power-pop. Explains Giles of the latter's overarching theme, ?We all come to these themes of self-forgiveness, letting go, giving into change, trusting that something better is coming.?