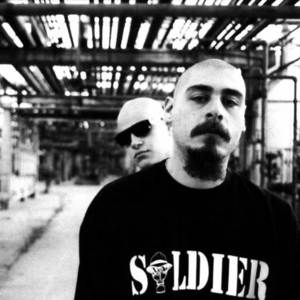 Jack and older brother Duke make up the chicano (Mexican-American) hip-hop group that has long reigned as the undisputed king of the Los Angeles underground scene, cultivating an army of devoted fans known as the Sick Soldiers. The first seeds of Psycho Realm were sown in the tough downtown Pico-Union neighborhood, right across the street from Doheny Park. First-generation Americans and the eldest two of the four Gonzalez boys, Jack and Gustavo, a.k.a. "Duke," grew up in the contentious neighborhood in the mid- and late-1980s.

The first seeds of Psycho Realm were sown in the tough downtown Pico-Union neighborhood, right across the street from Doheny Park. First-generation Americans and the eldest two of the four Gonzalez boys, Jack and Gustavo, a.k.a. "Duke," grew up in the contentious neighborhood in the mid- and late-1980s.

"Our side of town is the 'Sick Side' of town. They have the South Side, North Side, East Side, whatever. Our side is the Sick Side," Jack explains over a lunch of Argentine Lomo and Mimosas on Hollywood's Melrose Avenue one recent Sunday, fresh off a series of concert dates in Italy.

The patriarch of the Gonzalez family came to the U.S. from Mexico at the age of 15 and supported his family by painting cars. Their house was filled with music: classic oldies, which surface prominently in Psycho Realm's tracks, along with regional Mexican music and giants of the 1960s and '70s like Creedence Clearwater Revival, Led Zeppelin, and Jimi Hendrix.

Immersed in hip-hop as a middle-school student, Jack's neighborhood friend, Yonjo, got ahold of a record featuring a guy out of Miami rapping in Spanish. They threw it on the turntable and, inspired by what they heard, the boys wrote a Spanglish rap about all of the friends they grew up with and the growing specter of neighborhood gang warfare that would crest just a few years later in the early 1990s.

Older brother Duke was attending Cal State Northridge (CSUN) at the time, and Jack and Yonjo made the trip out one weekend to see Latin hip-hoppers A Lighter Shade of Brown play the on-campus pub. When the following act was late to the stage, a deejay friend of Duke's threw on an instrumental beat and persuaded Jack and Yonjo to get on stage. Their song about the neighborhood characters got the crowd going crazier than the headlining act, and Jack was hooked.

Eventually, Yonjo dropped out to work for his family's business, Duke got in on the act, and his days at CSUN soon came to an end as well. "I think he went with the intention of doing something, but didn't know what he wanted to do," says Jack. According to his little brother, Duke spent most of those two years with his '79 Regal backed up to the door of his dorm room, juicing up the batteries on his hydraulics with free electricity, courtesy of the Cal State University system. When the party was over, he left.

By now Jack was attending the Los Angeles Center for Enriched Studies' (LACES) magnet high school Mid-City. Always a talented writer, he once won an essay contest for an opportunity to travel to the Soviet Union, but those plans were derailed by the ill-timed collapse of communism. Jack also played first-chair trumpet in the band and rubbed elbows in Miss Cox's music class with Lucas MacFadden (a.k.a. DJ Cut Chemist of Jurassic 5, Ozomatli and the Brainfreeze projects with DJ Shadow), and a certain actor you may have heard of named Leonardo DiCaprio.

Jack admits that he and his boys used to give Leo a hard time, but when they ran into each other years later at a Playboy magazine party, there were no hard feelings. "He was like, 'Hey, your music's tight.' I was like, 'You're acting's dope,'" Jack remembers.

After graduating from LACES, Jack also took a stab at higher education, attending Santa Monica College on scholarship, taking random courses for credit like weight training. "My dad always wanted us to do the college thing," he says. "Get a good job, make eighty-, a hundred-thousand-dollars a year. Live the good life, you know?" But with an infant daughter to support (he's now the proud father of five girls) and a waning interest in academics, Jack decided that his energy was better spent working and nurturing Psycho Realm's music.

About that time, Psycho Realm caught what could be considered the band's big break. It was 1993 and they were playing a free "End Barrio Warfare" show at the Olvera Street Plaza downtown, which happened to be attended by B-Real of Cypress Hill. B liked what he heard, met with Jack and Duke after the show, and eventually signed Psycho Realm to his production company and the Ruffhouse/Columbia/Sony label, mentoring the fledgling duo. "He was a good mentor," says Jack. "He helped us structure our songs more.
Live shows, he taught us how to work the crowd."

B-Real was so impressed with Psycho Realm that he actually wanted to join the group and make it a trio, but Jack and Duke were reluctant to let anyone else in the fold. "We had the mentality of the old rock bands: If you can't do an album on your own, you ain't shit," says Jack. The brothers told B-Real they would pass, but he was persistent. "We told him if you're going to be in the group, you've got to do all the promotional stuff, too. You don't get superstar status. And he was down with it, so we were like, 'Let's do the whole album.' And we did the whole first album with him."

When it came time to put out their self-titled debut album in 1997, Jack and Duke were adamant that it was credited only to Psycho Realm, minting them as their own brand. Sony didn't go for it. "On everything, every sticker, it said, 'Featuring B-Real of Cypress Hill,' " recalls Jack. "You can't really blame them because they're sinking so many dollars into it. They're going to go for the marketing aspect." It wasn't all bad news, though. Even now, when Cypress Hill comes up, Psycho Realm usually gets a mention, and vice-versa.

Timing was not on their side, however. Simultaneously, Cypress Hill, Nas, and the Fugees were all on the Ruffhouse label, and they all had big radio hits. Not being a radio-friendly group, Psycho Realm fell into a no-man's land, and consequently fell through the cracks. "They didn't know what to do with us," laments Jack. "Two Mexican guys from L.A. rapping. They were just like, 'What is this? How can we market this?' "

Psycho Realm eventually decided it was best to part ways with Sony. "Sony did give us a worldwide promotional campaign, so we're known all over the world now," says Jack. "We can go to Europe and have promoters pay us to do shows. And we have fans that are coming to the shows all over the world ? Mexico, South and Central America, Europe, Australia."

With a DIY work ethic, the Gonzalez brothers have also cultivated a vast network of independent distributors around the globe, keeping their music, their fans ? and their profits ? close to their chests. Jack breaks it down: "Instead of making eighty cents a record, we're making six or seven dollars a record. It's more of a direct contact with the streets, too, because on a day-to-day basis I'm going around to stores dropping off product. People at the shows buy it, people see me on the streets. I'm out there every day. It's being accessible. I think a lot of people can relate to us and the fact that we're in everybody's face, we're standing next to everybody, it makes it that much more real."

The ugly face of Los Angeles street violence got a little too real for Psycho Realm in late January 1999, just a month before their second album, "A War Story, Book 1," was scheduled for release on their own Sick Symphonies label. After a Delinquent Habits show at the El Rey theatre, Duke and a few friends went in search of late-night nourishment, ending up at Tommy's burger stand at Beverly and Rampart. Following an altercation in the parking lot, Duke was shot in the neck, severing an artery, with the bullet ending up right between the "L" and the "O" of his "Los Angeles" tattoo.

By the time Jack made it to the scene, Duke was already on his way to County-USC Medical Center, and only his jacket remained in the street, ringed by yellow police tape. He caught up with Duke in the hospital hallway, barely alive and disfigured by swelling, bandages and clamps. Duke survived, and the police arrested the shooter, but his injuries left him a quadriplegic at 28.

Jack calls the months after Duke's misfortune "The Dark Ages." "I wasn't really doing much," he says. "Not really making music, just cruising the streets." Duke eventually convinced Jack to get back to making music, and he hooked up with dedicated foot soldiers of the Psycho Realm promotion machine and fellow Angelenos, Street Platoon. Together they recorded "The Steel Storm," released in 2001. Dad went to nursing school so he could care for Duke full time and Psycho Realm eventually got back on track.

By all appearances, Psycho Realm barely missed a step. When they threw a record-release party at the El Rey, the same theater where they attended the Delinquent Habits show that fateful night in 1999, Sick Soldiers lined up around the block, and the 600-plus fans that were turned away incited a near-riot. The L.A.P.D. even showed up, decked out in riot gear, though the situation eventually ended peacefully.

"We do it all ourselves," says Jack. "For two guys [Street Platoon], me and my brother, who's quadriplegic, we're not doing too bad."