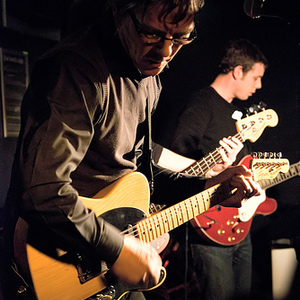 Formed early 2002 in Bellshill, Scotland The Primary 5 are Paul Quinn & Ryan Currie. Paul played drums for Glasgow band The Soup Dragons after joining them in 1989. Paul played on the bands biggest selling album Lovegod, which spawned the massive hit single "I'm Free", which reached the Top 5 in the UK single's chart as well as scoring chart success in many countries and proving, without doubt, to be the bands biggest hit.

The second album Hotwired didn't fair so well and led to Paul, Jim & Sushil jumping ship early "91" . Suffice to say The Soup Dragons ran out of fire. Sushil went on to becomer a member of BMX Bandits before enjoying solo success as Future Pilot Aka, Jim joined Superstar before enjoying solo success as "Green Peppers" and Paul joined Teenage Fanclub early 1992. "One of the greatest moments of my life was being asked to join Teenage Fanclub" Paul was quoted as saying. Joining the band prior to the recording of the brilliant "Grand Prix" and going on to record 3 more albums, "Songs from Northern Britain", "Words of Wisdom & Hope", a collaboration between Teenage Fanclub and cult American artist/poet/songwriter Jad Fair of Half Japanese fame. Paul's final contribution to Teenage Fanclub was his involvement in the recording of "Howdy". Paul left the band in 2000 and decided to take some time out and for a short time, a very short time, he decided that he wanted to get a "normal job" far away from the music industry that he seemed disenchanted with.

After trying several things out including working as a postman for a few months, the sabatical was over and the lure & love of making music became too strong. Paul had only ever played drums in bands, never written or felt the desire to write songs, never played guitar and never sang, but there wasn't any band, just a pile of equipment given to him on his leaving TFC including a Takamine acoustic guitar. For the first time it was up to Paul what he did musically and after several months of messing around with his new found musical companion, his guitar, he came up with his first songs, "Comin' Home, Easy Chair, I'll Lay You Down & Field of Dreams. Not knowing where he was going with this and with no vehicle for the songs he ran into a bit of a wall until, through a friend, he hooked up with guitarist/songwriter, Ryan Currie, who at that time was writing and singing with his own band "Coolerking". Ryan offered to help Paul demo his songs and it was during these sessions that Paul realised that he'd stumbled upon one very talented guy.

Talented in the sense that not only could he play guitar very well, he could also play bass guitar & piano as well as being a great engineer. During the initial sessions something clicked between them and before long the 4 songs had turned into 11 or 12 and the guys decided that they had enough songs to put together a decent record. Mixed by Nick Brine (Oasis, Stone Roses, Bruce Springsteen) at Paul McGuigan (Guiggs) from Oasis home studio the first album, "North Pole" was complete. Released in the UK on Paul' own, now defunct, "Bellbeat Music" label in 2004, North Pole went onto be released in Japan(ThisTimeRecords) Korea (Beatball Records) and North America (Microindie) with great success. In early 2005 the band played support to Arthur Lee & Love, the great man's last UK tour before very sadly passing away. Some Spanish Festival appearances late 2005 marked the bands last shows in support of North Pole and Paul & Ryan' where now looking at getting the next album started. Through support from The Scottish Arts Council, the guys had "a budget" to work with for the first time. Pleased with the way they had worked together on North Pole, they decided they would record in the same way: Paul taking care of drums and vocals with Ryan playing guitars, bass guitar, keyboards and engineering the drum tracks.

Recording started at the end of Jan 2006 at Reeltime Studios in Newarthill, Scotland We asked a couple of friends for some help and they, as always, duly obliged. Raymond McGinley Teenage Fanclub) came in and engineered/produced the guitars, freeing Ryan up to concentrate on being a musician rather than behind the desk and Norman Blake (Teenage Fanclub) engineered/produced the vocals. "It was very cool getting Norman & Raymond to work on my album. These guys are masters of their game and boy did they make the difference". With the recording process complete the camp moved to Rockfield Studios in Wales where, once again, the band hooked up with The Primary 5 silent member Nick Brine. One week and lots of laughs later the recording was complete. "This is definitely a massive step forward sonically and in the quality of the songs. We're both very happy at the results". The album will be released on the Re-Action Recordings label at the beginning of March 2007 with a download single released on January 29th 2007 with live shows to be announced soon.

from the myspace page:
http://www.myspace.com/theprimary5