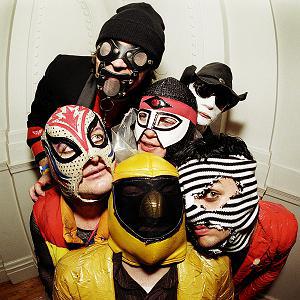 There are two artists with this name: 1) The Network is a 5-piece New Wave/Synth Punk band from California. The band consists of all three members of Green Day and two of their touring musicians. Their stage names are Fink (Billie Joe Armstrong), The Snoo (Tre Cool), Van Gough (Mike Dirnt), Captain Underpants, and Z. It should be noted that Green Day frontman Billie Joe Armstrong's alter ego is Wilhelm Fink and Green Day drummer Tr? Cool went by King Underpants in the band The Lookouts, but is reportedly The Snoo in The Network.

These are clues as to the identities of the individual members, and it is known for certain that the members of Green Day are in The Network. After their album Money Money 2020, The Network added a new member to the band : Balducci.
Billie Joe Armstrong dismisses Green Day's involvement in The Network as but a rumor, ostensibly for publicity purposes, even getting into a competitive argument with The Network. Although the style of music is different (New Wave as opposed to Green Day's pop-punk style), Armstrong's voice can be unmistakably made out on several Money Money 2020 tracks. The official Network band site claims that "Fink" put out the money for the band himself. In reality, Billie Joe Armstrong fronted the money for the band himself, and they are signed to Adeline Records, the record company he co-owns. Neither Fink/Billie Joe's or The Snoo/Tr? Cool's Masks fully cover their faces, making it quite easy to discern these two members. Van Gough sings on most Network tracks in a manner similar to that of Mike Dirnt.

2) The Network from NH revives 1997 with a sound similar to Turmoil, Coalesce, Bloodlet, Deadguy and a pinch of Refused and The Blood Brothers. Incredibly spazzy, The Network features ex-Dead Water Drowning/Premonitions of War vocalist, Nate Johnson on bass/backing vocals and guest appearances by Ryan Mckenney from Backstabbers Incorporated, Guy Kozowyk from The Red Chord & Adam Dulong of Cannae.