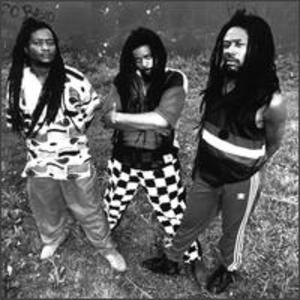 www.allmusic.com Biography by Jo-Ann Greene Even by Jamaican standards, the Meditations' early career is convoluted, and both Ansel Cridland and Danny Clarke's careers were already well underway before the pair linked up. Cridland, born in 1951, moved to Kingston as a child, and apprenticed as a jockey. However, he ended up working odd jobs, before deciding to make his career as a singer, and formed the vocal group the Linkers during the rocksteady era.

Even by Jamaican standards, the Meditations' early career is convoluted, and both Ansel Cridland and Danny Clarke's careers were already well underway before the pair linked up. Cridland, born in 1951, moved to Kingston as a child, and apprenticed as a jockey. However, he ended up working odd jobs, before deciding to make his career as a singer, and formed the vocal group the Linkers during the rocksteady era. The group's lineup was fluid, but regardless, the Linkers recorded nearly a dozen singles, although none particularly hit with the public. Clarke, a Kingstonian by birth, had sung briefly with the Flames, Alton Ellis' backing group. Another Flame, Sweet P, introduced Clarke to Cridland, and the two became fast friends. By the early '70s, the two were recording as solo artists, even though both much preferred the sound of harmonies. Things finally began coalescing in 1974, when the pair decided to audition together at Channel One. There, Junior Delgado was holding auditions for label head JoJo Hookim. He was blown away by the pair's "Woman Is Like a Shadow," as was another young hopeful, Winston Watson, who offered up his falsetto harmonies on the spot.

The embryonic Meditations were now complete, but not yet birthed. "Woman" was recorded, but Hookim, unhappy with the results, refused to release it. The three continued writing and practicing together. Then, in late 1975, Clarke and Watson went down to Federal Studios where Dobby Dobson was holding auditions. Clarke offered up "Babylon Trap Them," and Watson "Woman Piabba"; Dobson recorded them both. Although Cridland supplied backing vocals on both numbers, the songs were released as solo singles. In 1976, the trio cut Cridland's "Tricked," credited to Ansel & the Meditations. That single brought the singers to television and helped snag them their first Caribbean, on a junket that included Culture, the Tamlins, Carl Dawkins, and Leroy Smart. By the end of the year, the group had officially become the Meditations.

During this time, they continued steadily recording with Dobson, and released Message From the Meditations, one of the most breath-taking debut albums ever recorded. Virtually the entire album had been, or would soon, be released as singles, from "Woman Is Like a Shadow" (which Dobson had gotten from Hookim, who then promptly released it on 45) through their first recordings for the producer, on through Cridland's seminal "Running From Jamaica" to the breezy "Changing of the Times." 1977 found them at Madison Square Garden with Calypso Rose, then, back home, the trio readied their next album. The seminal Wake Up arrived in 1978, and was again filled with another bundle of hit singles, including "Fly Natty Dread," "Turn Me Loose," and the title track. Intriguingly, the set also included a re-cut "Nyah Man Story," a song that dated from Cridland's days with the Linkers.

However, by now, the trio were extremely unhappy with the re-numeration they were receiving from Dobson, and severed their ties with the producer. Lee "Scratch" Perry was keen to pick up the reins. The Meditations had recorded several of Message's tracks at his Black Ark Studio, leaving the producer highly impressed. Although the group would not acquiesce to his demand to produce their next album, they were willing to cut a few singles for him. "No Peace," "House of Parliament," and "Think So" duly followed, with the latter song making quite a splash in Britain, where Island released it on the flip of the Cridland-produced "Life Is Not Easy" single. It was Perry that introduced the Meditations to Bob Marley this same year, a fortuitous meeting that resulted in the trio backing the Wailer on "Rastaman Redemption," "Blackman Redemption," and "Punky Reggae Party." The Meditations provided harmonies for innumerable other artists during the late '70s, notably Jimmy Cliff and Gregory Isaacs.

As the decade faded, the trio's star brightened. Marley's Tuff Gong label intended on putting out the Meditations new album, and released the exuberant "Miracles" single. A number of Wailers provided musical accompaniment on that song, as well a clutch of other recordings from this period. Unfortunately, Cridland had a falling out with Tuff's label manager, and with that, the projected album was no more. However, the Meditations did perform two songs at the legendary Peace Concert at Marley's request. It was 1980 before the group finally released their third album, Guidance, which was again filled with classic songs. But by then, international interest in reggae was beginning to wane, while Jamaicans were now under the thrall of the DJs.

Three more years passed before the trio returned with another full-length, No More Friend, sublimely backed by the Roots Radics. The set was overseen by Linval Thompson, who had produced a number of the group's singles earlier in the decade, including 1982's "Sit Down & Reason." In 1984, the group recorded a handful of songs, including a re-cut "Quiet Woman" and it's flip "Reggae Crazy," both fired by the Revolutionaries. By the end of the year, the Meditations were no more. Or at least not the original Meditations. Cridland carried on alone as Ansel Meditations, while Clarke and Watson continued as a duo under the Meditations name.

Cridland's solo career continued apace, via singles and two albums, 1988's Thunder on the Mountain and 1990's African Vengeance. Later, he joined forces with Yami Bolo for the excellent Tribute to Marcus Garvey album. Meanwhile, the Meditations were making equal in-roads in the States, touring to much success, and finally inking a new record deal with the U.S. Heartbeat label. That resulted in 1988's sublime album For the Good of Man. To the surprise of many fans, some of the set was overseen by Cridland. However, the trio's differences had been more geographical than personal or musical, with Cridland wanting to remain in Jamaica, while his bandmates preferring the greener pastures of the U.S. And so, in 1990, the trio re-formed, and two years later announced the fact on wax with Return of the Meditations. Compilations of their earlier material continued to appear since then, and today the group are seen as elder statesmen of a roots scene that they were so instrumental in defining.

Return Of The Meditations