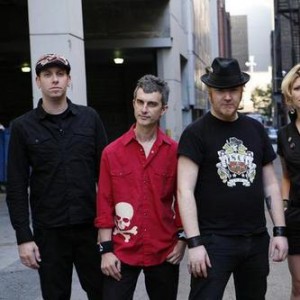 The Mahones are an Irish-born, Canadian Celtic punk band, who are widely believed to have pioneered the Irish Punk genre, having debuted in 1990, prior to other modern Irish Punk bands. The band was formed in Kingston, ON, Canada, in 1990 by Fintan "Finny" McConnell and Barry Williams, as a one-off band for a St. Patrick's Day party. The Mahones have released ten albums to date (Draggin' The Days, Rise Again, The Hellfire Club Sessions, Here Comes Lucky, Paint The Town Red - The Best Of, Live At The Horseshoe...

The band was formed in Kingston, ON, Canada, in 1990 by Fintan "Finny" McConnell and Barry Williams, as a one-off band for a St. Patrick's Day party.

The Mahones have released ten albums to date (Draggin' The Days, Rise Again, The Hellfire Club Sessions, Here Comes Lucky, Paint The Town Red - The Best Of, Live At The Horseshoe, Take No Prisoners, The Irish Punk Collection, Whiskey Devils - A Tribute To The Mahones and The Black Irish Album), and one very rare cassette (Clear The Way). The Black Irish Album, The Mahones' critically-acclaimed 7th studio album, was released along with a tribute album in 2011, featuring 20 international bands covering Mahones' songs.

The band's cited influences included The Clash, The Pogues, The Who, The Waterboys and H?sker D?. The group's lineup has changed a number of times, with McConnell and Williams as the main constant members. Pogues members Terry Woods and Phil Chevron joined the band on tour in 2003.

The Mahones have shared stages and toured around the world with legends such as The Dropkick Murphys, Stiff Little Fingers, Shane MacGowan and The Popes, Billy Bragg, Chuck Ragan, The UK Subs, Sick Of It All, The Defects, Agnositic Front, The Buzzcocks, D.O.A., Against Me, The Tragically Hip, The Damned, Suicidal Tendencies, The Prodigy, Gwar, Skunk Anansie, Tricky, Blue Rodeo, Steve Earle, The Alarm, Sinead O'Connor, The Street Dogs, Roger Miret and The Disasters, Flogging Molly, Spirit Of The West, The Dubliners, Christy Moore, The Band and Van Morrison. More recently, Scuffy Wallace of The Dropkick Murphys joined The Mahones onstage for a few shows as Tin Whistle player in Toronto and Montreal during a recent Dropkick Murphys Canadian tour.

Over the years, The Mahones' music has appeared in several major International Hollywood film releases. Recently, their song "Paint The Town Red 2010" was featured in the climactic final fight scene of the 2 x Academy Award/ 2 x Golden Globe winning Mark Wahlberg/Christian Bale/Amy Adams film "The Fighter" (2010). The Mahones also co-wrote and recorded the title track for the Hollywood Pictures movie "Celtic Pride" (Wally High/The Mahones) featuring Damon Wayans, Daniel Stern, and Dan Akroyd which was composed specifically for the film. The song 100 Bucks was also featured in the movie " Dog Park ", featuring Natasha Henstridge, Luke Wilson, Janeane Garofalo, as well as Bruce McCulloch and Mark McKinney from Kids in the Hall. The Mahones' song 'A Little Bit of Love' is in the new film Ecstasy, based on Irvine Welsh's (Trainspotting) critically acclaimed book.

In 1999, bassist Joe Chithalen died in Amsterdam shortly after a concert. He had accidentally ingested food containing peanuts, to which he was allergic. The Joe Chithalen Memorial Musical Instrument Library, Joe's M.I.L.L., was established in Kingston soon after by Wally High.

The Hunger & The Fight (Part I)