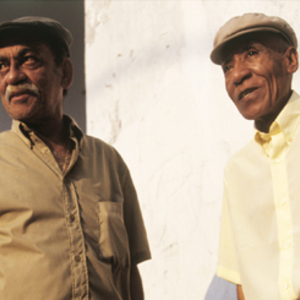 The Ipanemas, aka Os Ipanemas are led by Brazilian septuagenarians Wilson Das Neves and Neco. Both have had extraordinary careers spanning five decades as key players at the heart of Brazilian musical history. Wilson Das Neves, now also a vocalist, has long been one of the most sought-after drummers in Brazil and Neco's bossa guitar genius can be traced to countless cult classics. They have recorded and toured with so many greats including Elis Regina, Tom Jobim, Wilson Simonal, Jorge Ben, Chico Buarque and Elza Soares. Wilson also features with Rio's new samba big band Orquestra Imperial.

Intrinsically innovative at the time of its release, their eponymous debut recording is now considered an absolute classic. In a remarkable twist, the follow up wasn't recorded until almost 40 years later in 2001 with ?The Return of The Ipanemas' for Far Out Recordings. As a landmark recording by sensational veteran musicians, the album was acclaimed by the press, with The Independent and Music Week calling The Ipanemas Brazil's closest equivalent to Cuba's Buena Vista Social Club. ?Afro Bossa' was recorded two years later, followed by ?Samba is Our Gift' in 2006 which confirmed ?their sound remains extraordinarily fresh ? exhilaratingly spacious and aerodynamic' [The Daily Telegraph]. ?Call of the Gods' is their best album yet.

The Ipanemas debut tour in April 2008 is a rare chance to hear their 1960s repertoire as well as songs from all their Far Out releases played live in the UK for the first time ever. The line up includes very special guests Alex Mahleiros and Ivan Conti of Azymuth.

Call Of The Gods