The Hundred In The Hands 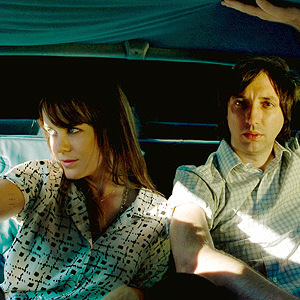 The Hundred in the Hands (often abbreviated as THITH) is an electropop duo, formed in 2008 in Brooklyn, New York, USA. The band members are Eleanore Everdell (vocals, synthesizers) and Jason Friedman (guitars, programming). Named after the phrase the Lakota Nation gave to the Fetterman Battle of 1866 in Wyoming (in which Crazy Horse led his warriors to a victory that resulted in the death of 100 enemies), The Hundred in the Hands fuses electropop with post-punk and dream pop elements, making for a sound that's equally danceable and dreamy.

Friedman was once a member of the indie rock outfit The Boggs. In November 2007, following a US tour supporting The Boggs' third album Forts, Jason Friedman and touring member Eleanore Everdell found themselves in the studio recording a brand new collaborative track without the rest of the band. Friedman said: "In the past, the collaborators I worked with would adjust what they did to fit my vision. Working with Eleanore it was clear that the time had come to shift into a more equal partnership.? In the 10 months since that session, the seven-year-old The Boggs were laid to rest, and The Hundred in the Hands were formed.

THITH released in 18 May 2010 their first 6-track EP This Desert, followed by the singles Pigeons in 13 September 2010 and Commotion / Aggravation in 15 November 2010. The song "Pigeons" supported by an original music video, became their most popular song. In 20 September 2010 they released the debut album The Hundred in the Hands.

The Hundred in the Hands are inspired by artists like Young Marble Giants, Wire, New Order, The Cure, De La Soul, Buddy Holly, Broadcast, LCD Soundsystem and many others.

Love In The Black Stack

The Hundred In The Hands