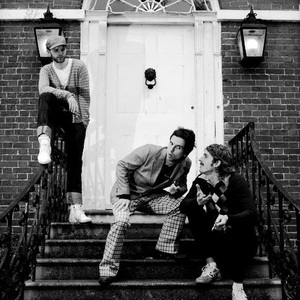 The Hoosiers are a pop/rock band from Reading, Exeter and Sweden. The band members are Irwin Sparkes (vocals, guitar), Martin Skarendahl (bass and backing vocals) and Alphonso Sharland (drums). Their most well-known singles are Worried About Ray and Goodbye Mr A. ?Worried About Ray? reached #16 on the UK Singles Chart dated 24 June 2007 on downloads alone. The single has climbed to #5 with CD sales included. Their second single Goodbye Mr A entered the charts at #5, and climbed another place to #4.

The trio are signed to RCA and their debut album titled ?The Trick To Life' was released 22nd October 2007. The band have spoken of their desire to write songs that are about ?more than just boy meets girl after a night on the lash?, and said that the album would surprise people who only know their singles.

Their second album 'The Illusion of Safety' was released 16th August 2010 and its first single 'Choices' reached #11 on the UK Download Charts immediately. Second single from that album will be 'Unlikely Hero' and it'll be released soon.

The band are now signed to Angelic Union after leaving RCA in early 2011.

The News From Nowhere

The Illusion Of Safety

The Trick To Life