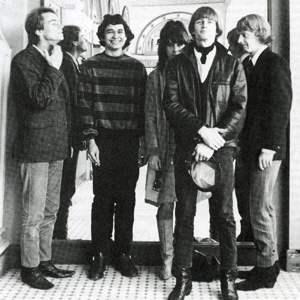 The Great Society was a 1960s San Francisco rock band in the burgeoning Haight Ashbury folk-psychedelic style pervasive during the time of its existence, 1965 to 1966. Remembered as the original group of model turned singer Grace Slick, the initial line-up of the band also featured her then-husband Jerry Slick on drums, his brother Darby Slick on guitar, David Miner on vocals and guitar, Bard DuPont on bass, and Peter van Gelder on saxophone. Miner and DuPont would not remain with the band for the duration.

In the late summer of 1965, after seeing a new band called Jefferson Airplane at The Matrix club, Grace and Jerry decided to start their own group, assembling it fairly quickly. The band made its debut at the Coffee Gallery in San Francisco's North Beach section on October 15, 1965, and continued to perform throughout 1966.

The band released only one single during its lifetime in 1966, "Someone to Love," (later re-titled "Somebody To Love") written by Darby, backed with "Free Advice." Issued on Autumn Records' tiny North Beach subsidiary label, the single made little impact outside of the Bay Area, but the association with Autumn did lead the band to working with staff producer Sylvester Stewart, still in the process of forming his own band, Sly and the Family Stone. Purportedly, Stewart would eventually walk out as the band's producer during a demo session after it took Great Society over 50 takes just to get one song right.

Momentum for the band began to build as they started opening for Jefferson Airplane and other successful local bands, with Columbia Records offering the Great Society a recording contract. By the time the contract arrived in the mail, however, Grace had been spirited away to replace departing vocalist Signe Toly Anderson in the Airplane, taking "Someone to Love" and her own composition "White Rabbit," one of Great Society's live showcases, with her. As both the visual and musical focal point, the band could not survive without its lead singer, and disbanded in the fall of 1966. Grace and Jerry would divorce as well.

Columbia would eventually release tapes of live performances by Great Society as two separate albums in 1968 after Grace found fame, repackaging both as a double LP in 1971. In 1995, Sundazed issued a compilation disc featuring the band's lone single amidst unreleased studio session material.

Born To Be Burned

Conspicuous Only In Its Absence (With Grace Slick) (Vinyl)

Live At The Matrix