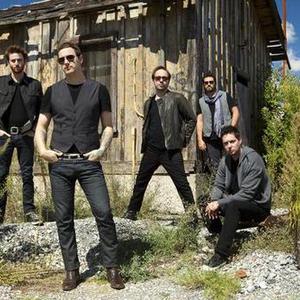 The Gracious Few (TGF) is an American rock band featuring guitarist Chad Taylor, bassist Patrick Dahlheimer and drummer Chad Gracey from the band Live, along with lead vocalist Kevin Martin and guitarist Sean Hennesy from the band Candlebox. With Live on what they initially termed a "two year hiatus", Chad Taylor, Chad Gracey and Patrick Dahlheimer needed a vocalist for the new songs they had written. Chad Gracey called his friend Kevin Martin and suggested that he should join them.

With Live on what they initially termed a "two year hiatus", Chad Taylor, Chad Gracey and Patrick Dahlheimer needed a vocalist for the new songs they had written. Chad Gracey called his friend Kevin Martin and suggested that he should join them. Martin explained, "...he called me and said Pat, Chad, and I have been writing and we think you are the perfect singer for this project.?

With Chad Taylor claiming that he no longer wanted to play guitar solos, Martin suggested that his Candlebox bandmate, guitarist Sean Hennesy, could do the job. Hennessy explained, "Tonally, he's got a big, fat, manly beast sound. I have more of a high-cut karate sound that cuts through, so our tones complement each other very well." Once Hennesy was recruited, The Gracious Few's line-up was completed.

On November 30, 2009 Chad Taylor, Patrick Dahlheimer and Chad Gracey issued a statement announcing that Live had disbanded following the departure of lead singer Ed Kowalczyk and that The Gracious Few was now their main focus. Their statement alleged that Kowalczyk had demanded a $100,000 "lead singer bonus" to appear with the band at the 2009 Pinkpop Festival, and had obtained sole publishing rights to the band's songs without the knowledge of the other three band members.

The Gracious Few played their first concert date at Fat Daddy's in York, Pennsylvania on May 27, 2010. This was followed by shows at Summerfest in Milwaukee on June 25, 2010 and The Troubador in Los Angeles on June 28.

The band began rehearsing in California in September 2009 and subsequently recorded their self-titled debut album. It was produced by Jerry Harrison of Talking Heads[5] and mixed by Tom Lord-Alge.[6] The first single from the album is "Honest Man". The band undertook an extensive American tour in the latter part of 2010 in support of the album, beginning in Buffalo, New York on September 24 and ending in Ventura, California on December 11.