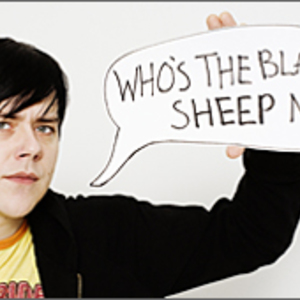 Having grown up outside Seattle after being born in Sweden, Gustaf Kjellvander AKA The Fine Arts Showcase is well familiar with the English language and uses it fluidly. After 10 years in the States his family (including older brother and artist Christian Kjellvander) returned to Sweden, where Gustaf as a mean of coping with boredom and alienation started writing music. One of his first gigs were at his school when he was 12 years old. And so the story goes.

Gustaf was previously in the bands Sideshow Bob and Songs of Soil.

The Fine Arts Showcase sound is made up of a lot of different fragments. Loaning the pop sensibilities of bands like The Byrds, Television Personalities, The Jesus and Mary Chain and artist Gene Pitney with the song writing and autobiographical elements of Merle Haggard, Leonard Cohen and John Lennon and the overall poetics of bands like Neutral Milk Hotel and The Silver Jews.

Surrounded with melody and variation ?Radiola? soars. Built like a compilation mix tape Gustaf has chosen to incorporate the sacral sounds of Songs of Soil, the raw emotion of Sideshow Bob and the experimentation and instrumentation of The Fine Arts Showcase debut from 2004 as well as exploring ground previously uncharted by Gustaf.

Recorded by the amazingly talented Mathias Old?n during several sessions and months in early 2005 and mixed in October 2005 by Mathias Old?n and Pelle Gunnerfeldt. Gustaf?s charismatic and friendly voice is backed by new members to The Fine Arts Showcase family, such as drummers and programmers Benjamin Singer, Stefan Rausfeltd, and Patrik Skoog, string players Hanna Sund?n and Tomas Ebrelius as well as familiar faces such as pianist/multiinstrumentalist Dan Englund. As always Gustaf plays a whole array of strange and beautiful instruments alongside the more traditional guitar/bass and vocals pop skeleton. This is music striving for something better, hoping to break the code, jump off the CD and to live a life of its own.

From the album ?Radiola? we have released three singles. First the astonishing ?Chemical girl?, hazy neon lights from the backseat of a taxi. Taking you where you don't want to go. ?Chemical Girl? is what you want to have but you know it is bad for you. A true classic.

The release of the second single ?The Shoplifter's Union? was a statement towards everyone that thought they knew where to put Adrian Recordings. Generalizations, genre labelling and prejudices are things we fight to avoid. This is all that but it is also beautiful music. The single came with five, very different, versions of the first single ?Chemical Girl?. First the "original", the demo version. Some like that one better. Then there was the mighty The Field, world famous for his works for the German techno label Kompakt, here he took a dreamy and epic, white noise, cut and glitch-approach to the song. Our own Familjen was turning "Chemical Girl" to an electric dance pop tune. The bassist in Swedish band Monkeystrikes (in the past also in Souls), Johan Karlsson is also a skilled remixer, here he puts a DJ Shadow feeling to it. Last out was the unmerciful Project-X with a hard EBM synth version.

Third and possible last single from ?Radiola? ? ?Danish Light?, came with a taster of the upcoming Fine Arts Showcase-album ?The Fine Arts Showcase sings The Rough Bunnies?. (An album to be released on Adrian Recordings in the spring of 2007) The track ?Modern Love?, is a cover of said band.