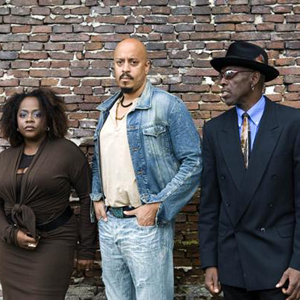 The Family Stand began with Jeffrey Smith and Peter Lord. The group was first known as Evon Jeffries and the Stand, and worked under this name for two years. They first started when Lord, a vocalist and keyboardist with a degree in musical composition at Howard University, returned to New York. Lord teamed up with Smith to produce and write for Mik Howard, Will Downing and many more. When the group became known as The Family Stand, they also added a third member with Sandra St. Victor.

When the group became known as The Family Stand, they also added a third member with Sandra St. Victor. Victor had attended the University of Kansas and, upon moving to New York, was in high demand as a vocalist, working with Freddie Jackson and Chaka Khan.

The group's first album, Chain, scored a hit with the track Ghetto Heaven which reached #3 on the R&B charts.

In 1991, the group released a second LP, Moon in Scorpio. However, the album tried to go in to many directions at once and often fetaured more rock than R&B. As such, the album failed to register with its urban audience and did not perform well.

In 1998, the group replaced Victor with Jacci McGhee after Victor left the group to go solo. During the same year, they released a new album, Connected. The album returned to the sounds of soul and highlighted the group's talent in writing and production.

The world according to The Family Stand is full of funk, love, rage and introspection. Formed by the powerhouse triple team of vocalist/keyboard wizard Peter Lord, vocalist multi-instrumentalist V. Jeffrey Smith and soul siren Sandra St. Victor in the early 90s, the band made the legendary "Moon In Scorpio" before going on hiatus in 1999. They have sustained a ravenous, excited following even in their absence. Largely this is because their dazzling live shows back in the day. Performances where impeccable musicianship, sizzling stage craft and volcanic energy left indelible imprints on the memory on their fan's hearts, feet and imaginations. They did what Great Black Music performances used to do on the regular--make you think hard about the world and your own inner life while you had a stomp down, sweaty, good time in the process. And in a community full of loving like-minded fellow travelers to boot. Built around the songwriting and production talents of Smith and Lord and the thermonuclear vocals of St. Victor, The Family Stand recombinated elements of rock, folk, soul, free jazz, hiphop, funk and hardcore gospel into a melodic amalgam rooted that's answered the musical question, What if Stevie Wonder ever sat in with Living Colour, Fishbone and Bad Brains? More than the sum of their influences though, the group took on social issues with a fury rare for a contemporary band rooted in r and b. Family Stand classics such as "Plantation Radio" and "The Education of Jamie" are emotional rollercoasters that turn topical, political content into eargasms. At another end of the spectrum is their big club hit "Ghetto Heaven" which brought pure romance back to the hood with a soulfulness and a bounce that still can't be denied or easily duplicated. Not content to rest on their laurels, The Family Stand hasn't just reformed to resurrect old glory but has been in the lab cooking up a new mind body and soul throttling release for '07 called "Super Sol Nova". Here once again they are taking on the hot topics of day-9/11, the war in Iraq, fratricide in the music -- and on the streets -- with hard crunchy beats, loud and raunchy guitars, pyrotechnic vocalizing, sensuous horn and keys and a rock of ages sense of hope and redemption. Greg Tate