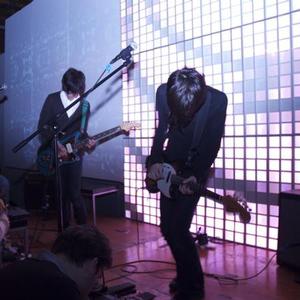 The Depreciation Guild (2005-2010) was a dreampop band from Brooklyn, New York, United States. Recognized as much for their unexpected arrangements as for their unique blend of gauzy guitars and Nintendo Famicom programming, The Depreciation Guild developed somewhat of a cult following in their five years in existence. Originally a vehicle of songwriter / producer Kurt Feldman, the band's first recorded output was Nautilus, an EP made available for free download through New York netlabel 8bitpeoples in 2006.

Originally a vehicle of songwriter / producer Kurt Feldman, the band's first recorded output was Nautilus, an EP made available for free download through New York netlabel 8bitpeoples in 2006. After recruiting Akira Hashizume as second guitarist, the group went on to record their first LP, In Her Gentle Jaws, which was released as a free download from their website in December of 2007. This album was self-engineered in New York and mixed by Joshua Eustis (Telefon Tel Aviv, Sons Of Magdalene) in Chicago, Illinois. Hashizume left the band in 2007 and was replaced by guitarist Christoph Hochheim. Anton Hochheim joined the band in 2008 as drummer.

In 2009, the trio signed to Kanine Records who released the remainder of their recorded work: two singles, Dream About Me (June 2009) and Blue Lily (September 2010) as well as their second full-length album, Spirit Youth (May 2010) which was also engineered, mixed and produced by Joshua Eustis. A limited edition vinyl reissue of the now deleted In Her Gentle Jaws album was released in 2009 as well. Depreciation Guild's second and final album, Spirit Youth, aimed to broaden the group's sonic palette, emphasizing pop hooks over gimmick and adding layers of live instrumentation to their already lush sound. To accommodate this, Raphael Radna joined the band on live bass guitar and keyboard.

After touring extensively in Europe, the United States and Japan in 2009 and 2010, the band amicably split to pursue other musical endeavors.

In August of 2010, the band released an original iPhone puzzle game called TileWild as a collaboration between Kurt Feldman and programmer Hayden Cacace, which featured three new compositions written for the game. While the band is currently defunct, Depreciation Guild, Inc. continues to develop games for the iPhone OS.

Currently, Kurt writes and produces music for his synthpop project, Ice Choir. He also plays drums in The Pains of Being Pure at Heart. Christoph is a touring guitarist for The Pains of Being Pure at Heart and writes music under his solo moniker, Ablebody. Anton has since played drums in the Brooklyn-based experimental rock band Dinowalrus. Raphael is also currently a member of Ice Choir, in which he plays synthesizer.

In Her Gentle Jaws