A Sunny Day In Glasgow 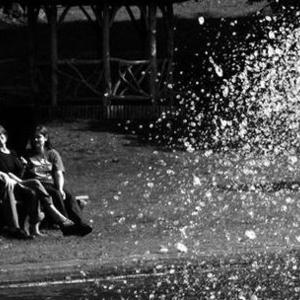 A Sunny Day in Glasgow began as a collaboration between friends Ben Daniels and Ever Nalens, both of whom had recently returned to Philadelphia after several years in the UK. The band name came from Nalens, who had been living in Glasgow, and Daniels kept it after Nalens left the project. In 2006, Daniels asked his twin sisters, Robin and Lauren, to start singing on the songs they had been working on.

In March of that year the trio self-released The Sunniest Day Ever EP to great acclaim from college radio stations and blogs. Their debut release, Scribble Mural Comic Journal, came out February 2007 and received favorable reviews from Pitchfork and Drowned in Sound among others. Scribble Mural Comic Journal was recorded with one microphone in a bedroom in West Philly and pushed the boundaries of dream pop often drawing comparisons to My Bloody Valentine and Cocteau Twins. During the summer of 2007 the band toured the United States including in-studios on KEXP and Radio K and released a handmade tour only EP titled Tout New Age which was subsequently released as a digitally only EP. A year later the band emerged for a performance at the Whitney Museum as part of the Wordless Music Series and an in-studio performance on WNYC. A month later they toured across the UK and France which was celebrated with a string of 7"s coming out labels as varied as Slumberland, Disjuncture and Georgraphic North. Shortly following their tour, Ruined Potential released SMCJ in a limited edition on 180 gram double vinyl. Though only playing a few shows stateside after their European tour the band shared the stage with such luminaries as Telepathe, M83 and Asobi Seksu. During the fall of 2008 the group - now comprised of guitarist/drummer Josh Meakim and cellist/vocalist Annie Fredrickson - assembled in a dance studio space in rural New Jersey to record their sophomore album. Their new album, Ashes Grammar, expands on the dream pop themes of SMCJ and finds the band experimenting with recording techniques a la Alvin Lucier. Ashes Grammar was released worldwide on Mis Ojos Discos on September 15, 2009 and will be available on a cd, as a download and on a limited edition double vinyl. On March 2, 2010 ASDIG released a vinyl and digital only 12" EP titled "Nitetime Rainbow" which features some of their brightest sounding recordings to date. Newest additions to the group include bassist Ryan Newmeyer, vocalist Jen Goma and drummer Adam Herndon. The gang will be touring North America and Europe throughout early 2010.