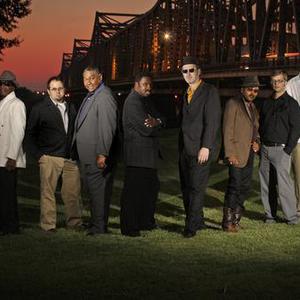 The Bo-Keys http://www.thebokeys.com don't simply replay the Memphis instrumental tradition ?they deliver a hard-hitting and authentic take on the city's original soul-stew sound. A devotee of Stax instrumental groups like the Mar-Keys and Booker T. & the MGs, bandleader and bassist Scott Bomar formed the Bo-Keys as an homage to the quintessential Memphis sound ?yet he has both feet firmly planted in the 21st Century.

Their story goes back to 1998, when Bomar was asked to put together a band to back former Stax artist and songwriter, Sir Mack Rice. The idea for a soul-jazz combo was born, but it took Bomar a few more years to assemble the perfect line-up for the Bo-Keys.

A chance meeting between Bomar and guitarist Charles 'Skip' Pitts ? at Memphis' Stax Music Academy, where both were teaching at-risk youth ?led to the current incarnation of the Bo-Keys. Isaac Hayes' right hand man (that's Skip's wah-wah you hear on the intro to "Theme From Shaft"), Pitts also lent his unforgettable grooves to Rufus Thomas'"Do The Funky Chicken", the Soul Children's "I'll Be the Other Woman", The Isley Brothers' "It's Your Thing" and Gene Chandler's "Rainbow'65."

Trumpeter and vocalist Ben Cauley is truly a soul legend. Ben is a founding member of the original Bar-Kays and the only surviving member of the fatal crash in Madison, WI which took the lives of his band mates and Otis Redding. Ben has played on many sessions in Memphis and Muscle Shoals with everyone from Jerry Lee Lewis to The Doobie Brothers.

Drummer Howard Grimes is a best known as a member of the Hi Rhythm Section on records by Al Green, Ann Peebles and others in the 1970s.
Grimes first performed in public at the age of 12, with Rufus Thomas. By his late teens he recorded regularly on sessions for Satellite Records, which later became Stax. He also began working with bandleader and record producer Willie Mitchell at Hi Records. As a key member of the house band at Mitchell's Royal Recording Studios in Memphis, Grimes was instrumental in creating some the most memorable songs and soul grooves of the 1970s.

Keyboardist Archie "Hubie" Turner is a member of the highly esteemed Hi Rhythm Section. As a session player at Willie Mitchell's Royal Studio, "Hubie" has played on countless classics by Al Green, Ann Peebles and Syl Johnson. Archie is also a member of many groups whose rare Memphis 45's are sought after by soul/funk DJ such as The Pac-Keys, The Martinis and Black Rock.

Trumpeter Marc Franklin, tenor sax man Derrick Williams and baritone sax player Kirk Smothers are, like Bomar, young players on the Memphis scene. But over the last decade, these men have anchored some mighty horn sections, recording and performing live with such legends as Rufus Thomas, Ike Turner, Bobby "Blue" Bland, and Al Green. With an energy and raw talent that's reminiscent of the Memphis Horns, Franklin, Smothers and Spake are living proof that Memphis music is alive and well.

Bomar's concept was for an updated version of the incendiary Memphis sound embodied by players like Skip Pitts and Ben Cauley. Not only did he capture that sound, he recruited the original musicians who inspired him in the beginning. In spring 2003, the Bo-Keys headed into Willie Mitchell's Royal Studio to record their debut album, The Royal Sessions, which was met with critical acclaim, including praise from NPR who continue to play their tunes on air.

The group also performed the score for the Academy Award winning film, Hustle and Flow and performed the song, "Kick It" for the Paramount/Nickelodeon animated feature, Barnyard.

In 2008 The Bo-Keys appeared in the film Soul Men, performing on-screen with stars Samuel L. Jackson and Bernie Mack and on three songs Bomar produced for the film's soundtrack, one of which, ?Soul Music? by Anthony Hamilton was nominated for a Grammy Award. Most recently Bomar produced an Emmy Award winning song written by former Stax artist and songwriter, Deanie Parker and a blues album for Cyndi Lauper called ?Memphis Blues? which features members of The Bo-Keys.
The Bo-Keys have performed live at many festivals including many appearances at The Ponderosa Stomp, London's Barbican Performing Arts Centre and Lincoln Center's Midsummer Nights Swing Series.

It's the sound of Memphis now? familiar, fresh, and unquestionably fantastic, the Bo-Keys.
http://www.thebokeys.com

Heartaches By The Number

Got To Get Back!