The Blind Boys Of Alabama 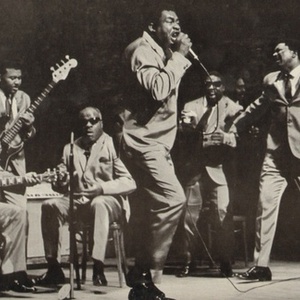 The Blind Boys of Alabama are a gospel music group from Alabama that first formed at the Talledega School for the Deaf and Blind in 1939. Although the Blind Boys of Alabama have been singing gospel music for more than five decades, it's only recently that the group has had the benefit of a major record company behind them. The founding members were Clarence Fountain, Johnny Fields, George Scott, Ollice Thomas, and Vel Trayler. The current group consists of Eric McKinney, Billy Bowers, Jimmy Carter, Joey Williams, and Donald Dillion.

Although the Blind Boys of Alabama have been singing gospel music for more than five decades, it's only recently that the group has had the benefit of a major record company behind them. The founding members were Clarence Fountain, Johnny Fields, George Scott, Ollice Thomas, and Vel Trayler. The current group consists of Eric McKinney, Billy Bowers, Jimmy Carter, Joey Williams, and Donald Dillion.

From their inception in the 1930s, when all were boys, all members of the group except one were blind. They began singing when all were students, in the glee club, at the Talladega Institute for the Deaf and Blind in Alabama, but didn't begin recording until 1948. As a youth, Fountain heard the legendary Golden Gate Quintet on the radio; the early Five Blind Boys of Alabama took their musical cues from that group. The group began singing professionally as the Happyland Jubilee Singers, and for years only toured the Bible Belt in the Southern U.S.

Since 1948, they've recorded for a variety of small record companies, and had gospel music hits in the 1950s with "Oh, Lord Stand By Me" and "I Can See Everybody's Mother But I Can't See Mine". In 1950, after the death of one of their members, the group renamed themselves simply the Blind Boys of Alabama.

The group recorded first for the Newark-based Coleman Records label. Between 1953 and 1957, the group recorded for Art Rupe's California-based Specialty label. In the 1960s, the group's hard-driving gospel sounds were imitated by people like Bobby "Blue" Bland and Marvin Gaye. The group recorded extensively for the Vee Jay label from 1963 to 1965. In 1969, Fountain left the group for a decade to try to make it on his own, and the group re-formed with all the original members in the late 1970s.

They gained widespread success in 1988, when they starred in an Obie Award-winning Broadway show. According to Fountain, the group's high point was being on Broadway for 15 weeks with the musical Gospel at Colonus. The musical opened up new avenues to bookings for the group, and they began touring theaters and larger churches in the early 1990s, embarking on their first European tours as well. The group was awarded a National Heritage Fellowship in 1994. In 1994 and 1995, the group played festivals including the Philadelphia Folk Festival, the Beale Street Music Festival and the King Biscuit Blues Festival. The group also toured in Melbourne, Australia and the World's Fair, in Brisbane.
Mid-1990s television appearances included Black Entertainment Television's On Jazz, and even a cameo on Beverly Hills, 90210.

Since the turn of the century, founding members, George Scott (2005) and Johnny Fields (2009) passed away. Clarence Fountain remains the only living founding member. The group is still performing, under the vocal leadership of longtime member, Jimmy Carter. Releases by the group in recent years have been favorites at the Grammy Awards ? they have won the Grammy Award for Best Traditional Soul Gospel Album every year since 2002. The Blind Boys of Alabama were inducted into the Gospel Music Hall of Fame in 2002. Their cover of the Tom Waits song "Way Down in The Hole" was featured as the opening theme for season one of HBO's The Wire. In 2008 they released Down in New Orleans, on which they were accompanied by such Crescent City legends as the Preservation Hall Jazz Band and Allen Toussaint.

Down In New Orleans

Got Tell It On The Mountain