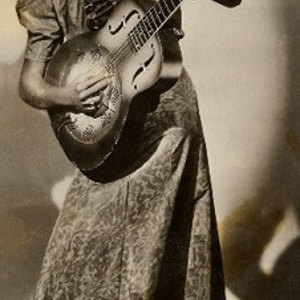 "Sister" Rosetta Tharpe (March 20, 1915 ? October 9, 1973) was a pioneering Gospel singer, songwriter and recording artist who attained great popularity in the 1930s and 1940s with a unique mixture of spiritual lyrics and early rock accompaniment. She became the first great recording star of Gospel music, first surfacing on the pop charts in 1939 with "This Train", her version of the traditional gospel standard.

Willing to cross the line between sacred and secular by performing her inspirational music of 'light' in the 'darkness' of the nightclubs and concert halls with big bands behind her, her witty, idiosyncratic style also left a lasting mark on more conventional gospel artists

Born Rosetta Nubin in Cotton Plant, Arkansas, she began performing at age four, billed as "Little Rosetta Nubin, the singing and guitar playing miracle", accompanying her mother, Church of God in Christ (COGIC) evangelist Katie Bell Nubin, who played mandolin and preached at tent revivals throughout the South. Exposed to both blues and jazz both in the South and after her family moved to Chicago in the late 1920s, she played blues and jazz in private, while performing gospel music in public settings. Her unique style reflected those secular influences: she bent notes the way that jazz artists did and picked guitar like Memphis Minnie.

Rosetta also crossed over to secular music in other ways. After marrying COGIC preacher Thomas Thorpe (from which "Tharpe" is a misspelling) in 1934 and moving to New York City, she recorded four sides with Decca Records backed by "Lucky" Millinder's jazz orchestra. Her records caused an immediate furor: many churchgoers were shocked by the mixture of sacred and secular music, but secular audiences loved them. Appearances in John Hammond's 1938 extravaganza "From Spirituals To Swing", at the Cotton Club and Caf? Society and with Cab Calloway and Benny Goodman made her even more popular. Songs like "This Train" and "Rock Me", which combined gospel themes with bouncy up-tempo arrangements, became smash hits among audiences with little previous exposure to gospel music.

Tharpe continued recording during World War II, one of only two gospel artists able to record V-discs for troops overseas. Her song "Strange Things Happening Every Day", recorded in 1944 with Sammy Price, Decca's house boogie woogie pianist, showcased her virtuosity as a guitarist and her witty lyrics and delivery. It was also the first gospel song to make Billboard's "race records" Top Ten--something that Sister Rosetta Tharpe accomplished several more times in her career.

After the war Decca paired her with Marie Knight, a Sanctified shouter with a strong contralto and a more subdued style than Tharpe. Their hit "Up Above My Head" showed both of them to great advantage: Knight provided the response to Tharpe in traditional call and response format, then took the role that would have been assigned to a bass in a male quartet after Tharpe's solo. They toured the gospel circuit for a number of years, during which Tharpe was so popular that she attracted 25,000 paying customers to her wedding to her manager Russell Morrison (her third marriage), followed by a vocal performance, at Griffith Stadium in Washington, D.C. in 1951.

Their popularity took a sudden downturn, however, when they recorded several blues songs in the early 1950s. Knight attempted afterwards to cross over to popular music, while Tharpe remained in the church, but rebuffed by many of her former fans. Retreating to Europe, Tharpe gradually returned to the gospel circuit, although at nowhere near her former celebrity. Her performances were curtailed even further by a stroke in 1970 after which she lost the use of her legs. She died in 1973 after another stroke, on the eve of a scheduled recording session.

From Blues To Gospel CD2