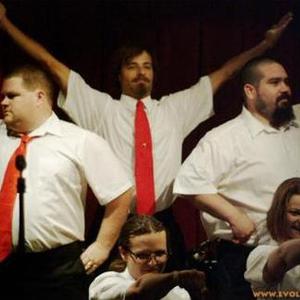 THE BLACK MATH EXPERIMENT is an unsigned band of questionable taxonomy from Houston, TX, which has been together since September of 2004. The band grew out of the mind of BILL CURTNER (guitars/programming), a musician of thirteen years and former member of Zapgun, Dorian Grey and Beta Duo. Their collective influences include Tori Amos, Aphex Twin, David Bowie, The Creatures, The Cure, Depeche Mode, Devo, Failure, Helmet, The Legendary Pink Dots, David Lynch and Angelo Badalementi...

Enlisting the aid of his long-time friend CHRIS SOLIZ (keyboards), a graphic artist and member of Mindless Automaton, they began scouring the sticky nether regions of cyber space for like-minded individuals fed up with the timid state of modern music. Their harvest included CHRISTI LAIN (vocals), a Dayton, TX choirgirl, the United States Army's own CAPTAIN MONGO NELSON (bass), and JEF ROUNER (vocals), hypnotist, luchador, and transvestite. The group instantly clicked, writing over thirty songs by the end of the year.

In December, they debuted as a live act at Helio's in Houston, and released their first E.P., What We Do? Is Secret on June 11, 2005 (currently available at Vinal Edge, Sound Exchange, and RBC Music). In July, they added to their ranks BRIAN COLEMAN (drums), a former Scientology praise band percussionist. The six members are currently at work on their first full-length release, due out in early 2006 and play all around the Houston area.

All You Need is Blood

Fake Words and Signs From Space

LAST TRANSMISSION FROM THE BLUE ROOM