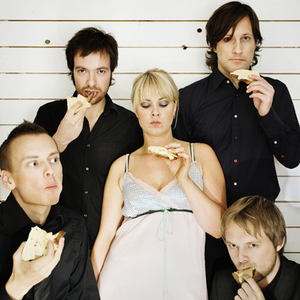 Like many other bands the members of The Alpine met in high school and started playing together in different groups. They formed the band Aroma which after a while and a change of line-up became The Alpine as we know it today. Living in Aalborg in the northern part of Denmark the band created the studio and rehearsal facilities called Quinten together with other young musicians from the city. Here they had their second home and gave birth to numerous recordings of their music.

Living in Aalborg in the northern part of Denmark the band created the studio and rehearsal facilities called Quinten together with other young musicians from the city. Here they had their second home and gave birth to numerous recordings of their music.

Some of those recordings ended on producer Kasper Windings lap, who immediately invited the band to Copenhagen for studio sessions. Through the next year the band recorded with both him and English producer Rik Simpson for a forthcoming debut release. However the project stranded and left The Alpine back on their own, without a record deal but much more matured as a band nevertheless.

In the fall of 2002 they released the promo-cd World Record and started booking their own live-shows. Soon the venues in Denmark noticed the band from the north and throughout 2003 The Alpine played many live shows. Danish national radio, P3 playlisted the song Ground Beneath Me in the spring of 2003 after it topped their demo-chart for several weeks.

Around that time The Alpine was, chosen to take part of the project Upcoming.dk initiated by Rytmisk Musik Danmark and Christian Backman from EMI Records. The purpose of this project was to help and guide the band forward in their musical career. The Alpine also signed with Swedish management Promopop and went to Stockholm in April 2003 to do their first Swedish showcase. A month later they performed at the annual SPOT09 festival for the first time. A festival for both the public and for the music industry which is held in the city of Aarhus.

After a gig at Von Hatten in Randers The Alpine was spotted by a booker from Loudness, a young and innovative booking agency, with whom they started working with shortly after. In the summer of 2003 the band went back in the studio to record. The result was the ep entitled Four New Numbers which soon became a follow-up for Ground Beneath Me on P3, this time with the song Too Many Monsters.


With the young director Lars Terp The Alpine also did their first musicvideo for the same song. Though the video was made under extreme low-budget conditions it made it to #1 on 'Nordiska Videolistan', a Finish TV-show featuring a nordic video-chart, very similar to MTV UpNorth.

In late 2003 the band moved to Copenhagen and began a new life in the big city. Despite the lack of a record deal The Alpine continued their excessive touring in Denmark throughout 2004. Futhermore the band was chosen by Danish TV-show 'Boogie' as a semifinalist in their 'Starfighter' competition, while both national and local radio stations in Denmark began playing the song 'High Underground'.

In the fall of 2004 the band went to Sweden to begin recording in the famous Gula Studion together with producer Marco Manieri. 3 new songs were done and in early 2005 the song 'Trigger' from these sessions became the fourth The Alpine tune to be playlisted on P3 radio.

The band became a popular name on MyMusic.dk as well - the biggest website in Denmark for up- and coming music - getting great reviews and a feature as "Band of the week".

After signing a deal with the Danish booking agency Offbeat the band went on their first German tour in late April 2005. A tour arranged by the German agency Polar-Zoo and supported by the Danish rock council, ROSA, which also included the bands first live TV-performance on the music show 'Blend' on TD1.

At the gig at the Magnet Club in Berlin on that very tour The Alpine was spotted by the Berlin-based management agency Exzess Berlin and shortly after a contract between the parties was signed. Having joined forces with a top-tuned management and made the basis for a stronger international chart-attack, the band went off to London in late May 2005.

After being selected among thousands of bands The Alpine were among the 10 European acts invited to take part of the music tv show "MTV A CUT". The 10 bands competed for a support slot for Anastacia and a week of rehearsing, gigging, recording (in Abbey Road) and hanging out in London were filmed for the TV-show and aired all over Europe on MTV in the fall of 2005. Anastacia was among the judges and The Alpine made it to the finals and ended as #2 in the show.

As a result of this the interest for The Alpine among many record companies outside of Denmark increased and combined with the hard work of Exzess Berlin the future for the band suddenly had a whole new perspective. Shortly after the MTV A CUT adventure had ended a showcase was set up in Copenhagen and among the invited were the German-based record label Gun Records - a sub-label to Sony/BMG.
The showcase was a success, the chemistry was right and a few weeks later The Alpine landed their first ever record deal.

The work on the forthcoming debut album immediately continued in the favourable Gula Studion in Malm?, Sweden and once again The Alpine teamed up with producer Marco Manieri. In between the recording sessions in Sweden the band spent time in Germany, playing promo gigs, filmed the musicvideo to the first single "Mondays Look The Same" (a song the band wrote while being on the MTV show in London) and warmed-up of Anastacia at the Paradiso in Amsterdam.

By the end of November 2005 the album work was almost done and release territories such as Germany, Austria, Switzerland, Denmark, Finland, Norway and Sweden were confirmed. The single made it as "Track Of The Week" on Danish National Radio P3 and a long German tour was scheduled for the rest of the year. A year like no other in the career of The Alpine and a strong indicator of what 2006 might bring.

On February the 27th 2006 The Alpine released their highly anticipated debut album entitled 'On Feel Trips' in Denmark. An album of 12 songs all produced by Marco Manieri and recorded in Gula Studion (S). The album showed the band at it's best and was the culmination of many years of hard work. While touring intensively in both Denmark and Germany the release date for Germany, Austria and Switzerland was set to April 15 the same year and the follow-up single for 'Mondays Look The Same' became the song 'Trigger'.

A Is For Alpine

Theres Only So Much You Can Do