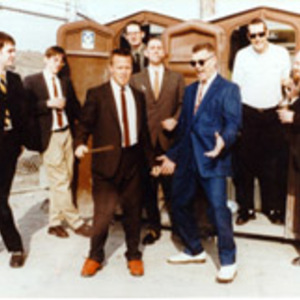 are a third-wave reggae/ska music group formed in Allston, Massachusetts in 1992. They have released three albums, two under the Moon Ska Records label and the latest with Fork In Hand Records, and have appeared on countless ska compilations in the U.S. and internationally. The band has been featured on MTV's The Real World and can be heard often on US college radio. They are influenced by The Skatalites, Laurel Aitken, Madness, The Specials, Professor Irwin Corey, Cedrick Maxwell, Xtc, Frank Sinatra, Sonny Rollins and The English Beat.

After splitting in 2004 the band has since reunited and in 2007 the Allstonians announced that quintessential ska hipster and former front man "King K" had returned to the fold (and has subsequently left due to troubles with his digestion). The band, which has resumed playing a brisk schedule of shows, now features original members Nigel T. Knucklehead, Darrell 'D-Train' Morrow, Ken 'King K' Knucklehead, Steve!, as well as longstanding members Tom 'Buns' Quartulli, Kurt "Luke" Wahlstrom, Eric "Merv" Bridson, Matt Maloney, "Father" David Roy, Jim "Liquid" Zavadoski, and Tyler "T-Bone" Oulton and Joe "Pondaco" D'Italia. New guys Matt "Funtimes" Giorgio and Dave "PBR" Tierney have joined us for the next leg of our journey, mutton. The group is notorious for its extremely high number of ex-members, as well as the band's love of alcohol and tea bisquits. Their level of glib intoxication approaches that of Dean Martin on good nights; on bad nights alcohol-fueled stage antics have featured a band member vomiting over his instrument on stage before passing out, and a member drunkenly quitting the group and storming offstage mid-set at the Middle East nightclub in Cambridge, MA.


The Allstonians supported and served as backing band for Lord Tanamo and the late ska legend Laurel Aitken on his last tour of the U.S. in 1999, playing five weeks' worth of shows across America. They are one of the few ska/rock steady bands besides the Skatalites who continue to play in an old-school Jamaican style.


The Allstonians offer some sample songs for download on their official website: "Mikey Dee" and "Sean Connery" from their 2003 release "Bottom's Up," and two unreleased songs, "Ordinary Day," and their cover of "Secret Love", inspired by Lord Tanamo's version which was inspired by Doris Day's version.