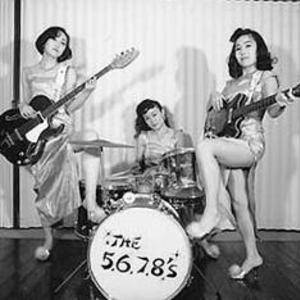 The 5.6.7.8's are a female, three-piece, japanese rock and roll band, whose music is reminiscent of American surf music and garage rock. The band formed in Tokyo, Japan in 1986. The band currently consists of founding members Yoshiko Fujiyama (vocals, guitar) and her sister Sachiko Fujiyama (drums) and long-time bassist Akiko Omo. The group have so named themselves because they do 1950's, 60's, 70's and 80's rock. They do many covers from American rock and roll records.

The 5.6.7.8's first started performing as a quartet in Tokyo, Japan, and were recruiting many guest performers during their Australian tour, once even recruiting a male member, "Eddie". They first officially became a trio in 1992 before touring Australia. They made regular appearances at indie venues in Melbourne in the early nineties, notably The Tote and uni gigs.

The 5.6.7.8's have done a guest performance in the 2003 Quentin Tarantino film Kill Bill Volume 1, playing in a sushi bar taking place in Japan but actually being filmed in China. Their appearance in this film launched them into the public eye of the western world. Their hit song Woo Hoo has become synonymous with an Internet phone television advertisement in Canada and the USA, in addition to a beer commercial in the UK. One of their songs is also briefly featured in the film The Fast and the Furious: Tokyo Drift.

From The Vault (CDS)