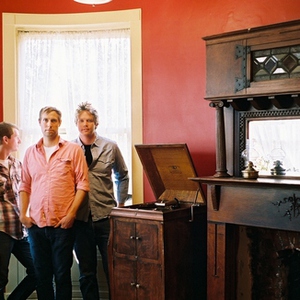 You know that feeling of release and exhilaration and jubilation you get from shouting your beliefs and hopes and dreams from the top of a cliff into the sunset? The wind lifts your words and carries them, dispersing them, disseminating them so they can grow, thrive, be. That's the feeling you get while listening to Tell Tale Heart. Their music lifts you, washes over you, enfolds and uplifts you. This is music to shout to the sky to; this is music that says what you're feeling and makes it so.

That's the feeling you get while listening to Tell Tale Heart. Their music lifts you, washes over you, enfolds and uplifts you. This is music to shout to the sky to; this is music that says what you're feeling and makes it so.

"We want to make sure that all three of our influences come through," explains Joel. "They're each a different part of the puzzle."

Since the band's formation two years ago, the three have come together twice weekly to share ideas, hum melodies, work out chord progressions, determine time signatures. "I had some ideas that were all in my head," explains Joel, "so I had to use this vehicle to get them all out. As we began to form this idea of what we wanted to do, Andrew and Alex started writing more songs." Lyrics generally come last, after the composition is complete, often composed on the spot by Joel.

In late 2006, the band self-recorded and released a six-song EP which served as its calling card, something for the fans to take home after each moving and sweat-soaked live performance. And oh, what a live performance it is: Joel and Alex careening, crashing, never standing still, Andrew fully immersed in making the beats and leading the time shifts. It's so electric, the guys have already shared a stage with many of their idols, among them Appleseed Cast, Decibully, Headlights, and Life and Times.

Though the members of Tell Tale Heart are, indeed, Christians, this is not a Christian band. Joel sums it up beautifully: "As individuals, we have so many things that are going on in our lives that are real and hard and great and terrible, and it just seems very difficult to swing that into being a Christian band. As soon as you do that, you're saying part of you is gonna be put on hold so you can always deliver a positive message. And that's very hard; that's an unnatural thing to make yourself do as a human."

Tell Tale Heart is currently at work on a yet-to-be-named full-length album. They're targeting a spring '08 release, with regional touring to follow.

As for the name, Tell Tale Heart really isn't an ode to Edgar Allen Poe, though he did coin the phrase. Explains Joel, "The heart has something to say, and there's really no way that we can speak it. I guess the best we can do is make our music somehow express that. We're telling the tale of what's inside all of us."

The Cost Of Living