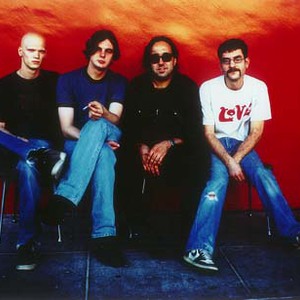 90s, Artists I Am A Top Fan Of, Bjm Fans, Neo-psychedelia, Psychedelic, Terrastock

From Hoboken, NJ, the Tadpoles pretty much exemplify what most American psychedelic music sounded like in the 1990s-- melodic rock wrapped in blankets of fuzz, heavily processed guitars and the occasional electronic studio effect. The Tadpoles were adept enough at jamming and developing themes, but they were at their best when working with concise, punchy songs. The Tadpoles have always been know as a 'psychedelic' band, which means their music references the mind-expanding sounds of experimental artists of the '60's and '70's.

But that 'retro' tag has never sat well with the band, which insists it's as inspired by modern-day guitar bands like the Jesus & Mary Chain and Spacemen 3 as it is by classic rock.

In 1990, Todd moved from Champaign, Illinois to New York City to form a live version of the group with collaborator/drummer, Michael Kite, who was already living there, attending NYU film school. Both shared a love for the classic psychedelia of artists like Love, Syd Barrett, Pink Floyd, the Stooges, the Velvet Underground and th e modern styles of psychedelia being perpetuated by groups like the Butthole Surfers, Flaming Lips, My Bloody Valentine & Spacemen 3.

By 1992, the duo had developed a sound & look for their live show complete with film projections produced by Michael. They found bass player, David Max, guitarist, Andrew Jackson and guitarist/vocalist Nick Kramer playing in another NYC fledgling group called HIT and recruited them to fill out the Tadpoles' live band. The group played clubs in Manhattan over the next two years and produced a 10 song demo tape called Superwhip (1992) to shop around to labels.

Their performance at the 1993 NYU Independent Music Festival led to the recording of their first album, He Fell Into The Sky (1994) with underground producer, Kramer of Shimmy Disc / Bongwater notoriety. The album was recorded and mixed in two days at Kramer's Noise New Jersey studio.

However, Michael and Andrew left the band following the recording sessions for He Fell IntoThe Sky and by the time of its release in 1994, only Todd, David & Nick remained. Todd relocated to Hoboken, NJ and formed Bakery Records in order to release the album. Following the great response to the album, the band decided to release all of their future music on their own label.

The trio recorded their second studio album (with two guest drummers), Far Out (1996) again with Kramer as producer; and, it gained a surprising amount of national recognition upon release. Jim DeRogatis, then senior editor at Rolling Stone, gave Far Out a coveted 4-star review in the May 30th 1996 issue; and, the group found themselves with a small, cultish international following. The album received much college radio airplay and rave reviews. The success of Far Out pushed the group to find a permanent drummer in order to play more shows; and, they found Adam Boyette to complete the group late in 1996.

The group performed at the first Terrastock festival in April 1997 and their aggressively psychedelic set won them many new fans and led to a West Coast Tour in November of 1997 with fellow Terrastock veterans, Cul de Sac. Windy and Carl and the legendary John Fahey also appeared on some of the bills. The group released the Know Your Ghosts E.P. (1997) for the tour.

In 1998, Tadpoles returned to Kramer's Noise New Jersey studio to record their third studio album, Smoke Ghost (1998). On this album, Nick shared the songwriting duties equally with Todd to establish himself as a driving force behind the Tadpoles' sound. The album was released simultaneously with Destroy Terrastock Live (1998) a terrific live recording of the Tadpoles' Terrastock set.

The Tadpoles' fourth and last studio album, Whirlaway, was released in 1999 to critical rave reviews on Australia's Camera Obscura Records. In February of 2000, Tadpoles performed their final live show, a sold-out bill featuring Sonic Youth's Thurston Moore and Half Japanese, at Maxwells in Hoboken, NJ. In May of 2000, Todd Parker announced that the group was disbanding and going on a hiatus of indefinite length. A 17 track "best of" compilation CD, Use With Headphones Late At Night, was released on Bakery Records in 2001.

Following the disbanding of the Tadpoles, David Max, Nick Kramer and Adam Boyette went on to reform "Hit" with David going back to guitar playing and singing (along with Nick) and Adam taking up the bass. Hit released a 4 song vinyl E.P. "Quosibility" in 2002. Max and Kramer went on to open up a rehearsal studio/recording studio in an old Bakery in downtown Jersey City to continue recording Hit as well as other select projects. Hit finished a full-length album, "See It Majestic", but as of January 2006, this has never been released. Todd Parker, temporarily (?) retired from the music scene, moved to Northern California and currently oversees the Bakery Records/Tadpoles empire from there ;)

In 2004, David Max joined the seminal psychedelic/industrial/experimental group, Psychic TV, as their new lead guitar player and proceeded to tour the world with the new incarnation, also known as PTV3. In 2005, PTV3 recorded an album of brand new material in Hit's Jersey City studio with Nick Kramer engineering. Among other guests, and to the delight of everyone, The Butthole Surfers' Gibby Haynes showed up at the studio to add a vocal track for the album, which is expected to be released sometime in 2006.

He Fell Into The Sky