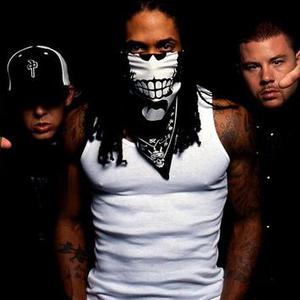 Swollen Members was founded in the mid-1990s by Vancouverites Mad Child, Prevail and Moka Only. Having begun a solo career while living in San Francisco, California, Mad Child returned to Vancouver for some work. There he met Prevail and Moka Only, working as partners and making a name together on Canada's West coast hip hop community. The trio saw each other's abilities, thought they heard opportunity knocking, and joined together under the name Swollen Members. Soon after, however, Moka Only decided he wanted to pursue a solo career and left the group.

In 1996, Mad Child and Prevail went to the B-Boy Summit in San Diego, California, where Mad Child won several rap battles and was initiated into the Rock Steady Crew, legendary to the hip hop/b-boy scene. The Crew is held in great respect as hip hop's highest collective - to join one must win a contest of skill against one of the highest ranked members. Swollen Members is one of only three rap groups affiliated with Rock Steady.

That same year, the duo began recording their first tracks, with help from many of their friends from the scene - MCs, DJs, and producers, including Rob the Viking. Rob would continue to work with the group through the years, eventually joining them later. From the praise they were receiving, they decided it was time to release their material as a group. With the subsequent release of three 12" singles on Mad Child's record label Battleaxe Records, the group quickly established themselves in the scene and built a respectable following. The next logical step was to release an album, which was titled Balance and released in 1999.

Balance received wide critical acclaim and has been claimed by the band to have sold in excess of 50,000 copies. Featuring collaborations with artists such as Everlast, Divine Styler, and Dilated Peoples, the album also netted Swollen Members the 2001 Juno Award for Best Rap Recording.

Following Balance, Swollen Members recorded and released Bad Dreams, which successfully dodged the so-called "sophomore curse" many artists suffer upon their second release. Bad Dreams was released on November 13, 2001, featuring guests such as Chali 2na of Jurassic 5, Son Doobie, Joey Chavez, and former member Moka Only. Like their debut, Bad Dreams was surprisingly successful for an independent rap album and brought Swollen Members global acclaim. Surprisingly, it appealed to both underground and mainstream audiences, with several singles reaching platinum status in Canada.

The album also earned Swollen Members their second Juno Award, and four MuchMusic Video Awards. The group continues to tour, visiting every major market possible and performing hundreds of shows a year; some with nearly 15,000 audience members. The media continues to give their music and live shows excellent coverage around the globe, and both new and old singles receive solid airplay on college and commercial radio. Their tracks have also been featured in a multitude of films, television programs, extreme sports videos, commercials, video games (especially games produced by Electronic Arts, which has a studio in their hometown of Vancouver), and compilation albums, the sales of which total in the millions when combined.

Swollen Members have appeared on numerous television shows, in addition to having several of their live shows televised. Like their singles, their music videos have been heavily played on both the Canadian MuchMusic and the American MTV, as well as on many independent video shows.

2002's Monsters in the Closet, their third release, brought them greater fame than ever before. Where Moka Only and Rob the Viking had only peripherally assisted the duo before, they now became official members of the group. Monsters included several unreleased tracks and remixes, as well as collaborations from fellow British Columbian Nelly Furtado and Saukrates of Def Jam. Production credits included Evidence from Dilated Peoples.

2003 brought Heavy, released yet again to critical acclaim and powerful sales, despite dismal video play time on MuchMusic. The band considers it the bridge between their underground origins and their potential for fame. Unfortunately the album was controversial among Swollen Members' fanbase. Many fans claim that Swollen Members have removed many elements of their style which had awarded them in the past. The lines were drawn between fans who began to listen to Swollen Members when Monsters in the Closet came out and fans attracted by the earlier two albums (especially Balance). They continue to tour, playing both local and international shows to the delight of their hometown fans.

In 2005 Moka Only decided to break off from the group for a second time and continue work on his solo career.

In 2006 Swollen Members released their fifth full album, Black Magic. It is understood that Mad Child and Prevail made an attempt to return to their previously critically acclaimed style and method. Their previous album Heavy was seen by the band as a disappointment, and isn't listed on their official site discography.

In August 2006, Swollen Members released their new single "Put Me On - Feat. Everlast" off of their new album, "Black Magic".

Their next CD is scheduled to be released at the end of the summer of 2008. According to the band's website, Mad Child will soon release a solo album.

Live At The Fox Theatre

Armed To The Teeth