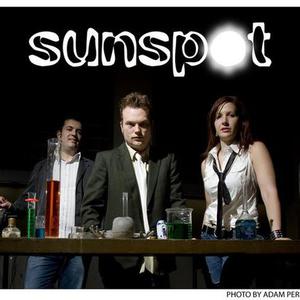 Singalong rock with big guitars, smart lyrics, and a sense of humor, the trio from Madison, Wisconsin combines the physical impact of hard-hitting rock with the ear candy of pop music and the thoughtful words of a singer-songwriter. Think the Fountains of Wayne or Barenaked Ladies with Lars Ulrich on drums and Eddie Van Halen on guitar. Sunspot's most recent CD, Singularity, was named Madison's Rock Album of the Year by the Madison Area Music Association.

Sunspot's most recent CD, Singularity, was named Madison's Rock Album of the Year by the Madison Area Music Association. Two of the tracks would go on to win awards as well, "No Place Like Home" as Rock Song of the Year, and "Sweet Relief" took home Video of the Year.

After joining forces in 1996 as students at the University of Wisconsin, they've gone on to record and release five albums, a DVD, and over a hundred biweekly video podcasts (Sunspot Road Mania), and have performed hundreds of shows all over the country, sharing the stage with bands like Death Cab for Cutie, The Flaming Lips, Sponge, SevenMaryThree, Hot Hot Heat, and Sick Puppies. Punk rock pioneer Milo Aukerman, from the legendary Descendents, has even joined them onstage for a performance on live television.

Some of their biggest successes come from their most ridiculous songs. Their geeky tune, ?Scott Bakula?, ended up being used by the man himself as the theme song for his 50th birthday party. Also, their album ?Loser of the Year? was named Rock Album of the Year at the Madison Area Music Awards and the next year, the band was awarded the state's biggest music nod as Artist of the Year by the Wisconsin Area Music Industry.

In early 2011, Sunspot licensed their song "Go, Pack!" to FOX Sports for use during the NFC Playoffs and Super Bowl, events seen by tens of millions of people around the world. The band is currently touring and working on new material for a Spring 2011 release.

Loser of the Year