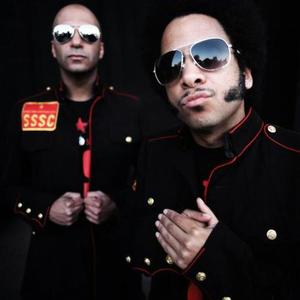 Street Sweeper Social Club is an American rock band consisting of Tom Morello (Rage Against the Machine, Audioslave) and Boots Riley (The Coup). Stanton Moore (Galactic) performed drums on their upcoming album. Their first known performance as "Street Sweeper" was at the Commodore Ballroom (2008-11-06), where they played a song called 100 Little Curses. They have recorded their first album Street Sweeper Social Club, which was released on June 16th on East West Records.

They have recorded their first album Street Sweeper Social Club, which was released on June 16th on East West Records.

Riley added, - 'This is a time when the working class is being fleeced left and right. More families will be homeless and more people will be jobless. They'll need something to listen to on their ipods while storming Wall Street...'

"The Ghetto Blaster EP" is an EP from Street Sweeper Social Club. The EP is released on August 10, 2010. It features covers of "Paper Planes" by M.I.A. and "Mama Said Knock You Out" by LL Cool J as well a remix of the bands second single "Promenade". They will also cover The Coup song "Everythang". It has also been confirmed that the full touring band has recorded on the album. Tom Morello spoke on the new EP in a press release, saying that they are shooting for an interesting combination of groups. "On The Ghetto Blaster EP we were shooting for a combo of the first Clash record and the Ohio Players greatest hits, interwoven with tractor trailer size riffs of course. This record definitely has more of a 'band' feel than the first, and Boots' lyrics and delivery have never been sharper." Boots Riley has also said of the upcoming EP ?We got a new EP that's going to come out called The Ghetto Blaster EP. [You can expect] hard, hard, hard music and some raw as lyrics on top.?
Track listing
1. "Ghettoblaster" 3:26
2. "Everythang" (The Coup cover) 3:40
3. "Paper Planes" (M.I.A. cover) 2:55
4. "The New Fuck You" 3:25
5. "Scars (Hold That Pose)" 3:53
6. "Mama Said Knock You Out" (LL Cool J cover) 4:25
7. "Promenade" (Guitar Fury Remix) 3:40