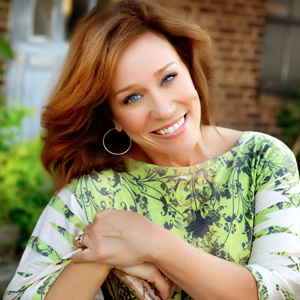 Lead vocalist in a trio of Cleveland rock bands in her teens, Anne Cochran was putting down demos and jingles before making everything official with a degree in Theater and Voice from Case Western Reserve University. She and her friend, Jim Brickman, had won the You Light Up My Life radio contest they joke about now before they were 18, making it impossible to honor the attached cocktail lounge play dates, being under age minors!

After college, Anne continued to play the band circuit in and around town, brought out a self-titled debut album, followed by Fishhead label's "Thinking of You", and wed her favorite fan and attorney. Once she began growing her little family, the gigs pretty much came to a halt, but Anne continued to pursue a successful career as the familiar voice of hundreds of well-known television and radio commercials.

Anne with Jim Brickman in younger days Jim Brickman was taking big strides out west at that time, but the pair had a forever friendship that would bridge the distance. The turning point came when he asked Anne to be his vocalist on an Asian tour in the wake of "By Heart "success. Jim was convinced his fans would love Anne's voice and her radiant persona. Their duo worked its magic and soon the pair had a first big date at Lincoln Center, fine-tuning their playful banter and polishing their sound: "Jim lured me back on stage and into the mainstream. After my 'big amp' experiences in rock, it was simply amazing to hear my own voice again!"

Someone is Missing At Christmas