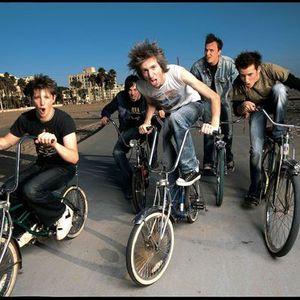 Rock band hailing from New Zealand noted for their quirky sound and hit song "Walkie Talkie Man" which was featured on Apple's iPod advertisement. The video for "Walkie Talkie Man" was directed by Michel Gondry (White Stripes, Bjork, Foo Fighters) and garnered 5 MTV award nominations and 1 Grammy nomination. It was also included in the Nintendo DS rhythm game Elite Beat Agents, as covered Jason Paige as well as being used in the animated film Robots and used heavily by the BBC. They have done a cover of AC/DC's Back In Black.

They have done a cover of AC/DC's Back In Black.

Formed in 1999, Steriogram got their name from two bands that members had previously performed with - Rogergram and Steriosugar.

Steriogram's first single release, Soccerstar was mediocre but upon the release of their second single, White Trash saw the group success soar. Like many bands, Steriogram toured New Zealand in a friend's van without any support crew, doing gigs where they could. In 2002, still unsigned, they joined several other New Zealand bands in the annual Boost Mobile School's Tour, playing for free during high school lunch hours to get exposure, as well as at bars at night.

In 2002, while recording at a rented beach house they were spotted by an American Label Scout for Capitol Records who had come upon their music video for White Trash on the internet and were signed to Capitol Records later that year.

2004 also saw the release of their debut album, Schmack! which has seen six singles released from it.

There were two main factors contributing to Steriogram's immediate success. Firstly, the national secondary school tour they went on helped to generate a wider fan base, as it allowed many who hadn't heard of Steriogram before to enjoy their unique sound. The other factor was due to their internet site and the use of fans' loyalty. On the site fans were able to join up for the band's newsletter and then eventually to what was known as a 'fan street pack'. This was sent to the fan via mail and contained promo CDs that had five of the tracks to be featured on their upcoming CD, and large amounts of stickers. This was where Steriogram relied on the support of fans, to hand out the promo CDs and stickers. These points proved to be very successful and rewarding for Steriogram as a new band.

This Is Not The Target Market