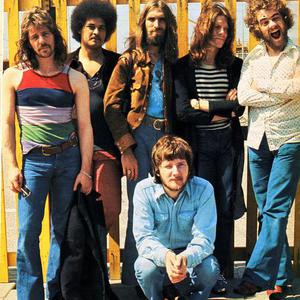 Stealers Wheel was a British folk/rock band formed in Paisley, Scotland in 1972 by former school friends Joe Egan (born 1944) and Gerry Rafferty (1947 - 2011). In the early 1970s, the band was considered to be the British version of American folk/rock supergroup Crosby, Stills, Nash & Young. They were initially joined by Roger Brown, Rab Noakes and Ian Campbell in 1972. However, that line-up only lasted a few months and by the time the band were signed to A&M Records later that same year, Brown, Noakes and Campbell had been replaced by Paul Pilnick, Tony Williams and Rod Coombes.

This line-up recorded their eponymous debut album, Stealers Wheel and was produced by the influential American songwriters and producers Leiber & Stoller.The album 'Stealers Wheel' (1973), became a commercial success. It contains their biggest hit 'Stuck in the Middle with You'. Two more albums were released ('Ferguslie Park', 1974 and 'Right Or Wrong', 1975) before Rafferty and Egan broke up. It took several years to sort out the legal problems connected to their break-up. After that, Rafferty became a star with his hit 'Baker Street' from the album 'City to City' (1978).
Paul Pilnick's early career was promoted and managed by Mr George Roberts whilst Paul worked as lead guitarist for the band, "Vince & the Volcanoes", led by Mr Vincent Tow/Ismail;
(Vinnie was an early, informal & friend, guitar tutor to, Lennon & McCartney)
They all worked at and from Liverpool 8, 'granby' during and including 1959 to 1963 and from 54 Huskisson Street Liverpool 8.

Stuck In The Middle - Hits Collection