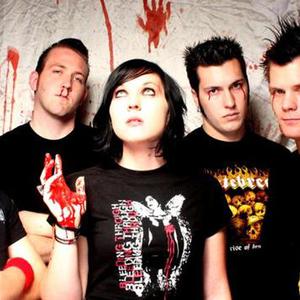 Now known as In Love And War. Molded from the raw energy of hardcore, the precision of metal, and the noncompliance of three decades of punk rock; Stalins War was conceived in the skateboarding mecca of Santa Cruz, California. Hard, intense, resourceful and ferociously dedicated, Stalins War defies the "female fronted stigma" by being tough, aggressive, original and independent; and by thrashing the notion of a typical, female-fronted, candy-covered, pop punk band.

Noted as one of the hardest working bands around, Stalins War breaks all barriers with their integrity, ingenuity, honesty and sincerity.

As a band, Stalins War comes from a variety of musical influences and political perspectives. While the band has been through several major line-up changes, no member of Stalins War is, or has ever been, a communist. The name Stalins War represents the less than perfect aspects of our social nature, and the war to achieve our dreams and goals-beyond all odds, and surpass all that stands in our way.

Founded by front-girl Moana Strom and guitarist Matt Cleaver, Stalins War has earned its reputation as one of the hardest working independent bands in their scene, reaching fans coast to coast and across oceans through extensive touring and a proactive use of the Internet. Stalins War continues to cement their position as an archetype of melodic hardcore, with an neck breakingly energetic stage show and an increasingly loyal and diehard fan base.

Stalins War released two full length albums: Stalins War (2001) and Rebirth From the Flames (2004), an EP titled Mirror in a Dark Room (2003), and a split with Seattle-based Aiden in 2004 called A Split of Nightmares.

Mirror in a Dark Room