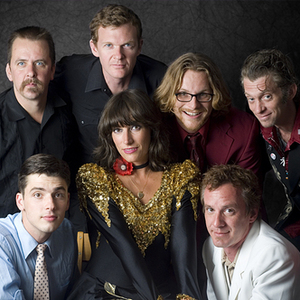 Squirrel Nut Zippers, featuring original and founding members Katharine Whalen, Jimbo Mathus, Chris Phillips, Je Widenhouse and Stuart Cole. On tour the band will be performing material from the entire catalogue. In addition there is usually a live performance with their celebrated animated video for the song The Ghost of Stephen Foster (beautifully done by the folks from the Simpsons).

Squrirrel Nut Zippers was also a candy popular in the 30's


The band still rejoices at the difficulty people have pigeonholing their unmistakable sound. A perpetually evolving, hybrid-stew of Southern roots traditions, blues and jazz, the Zippers were aptly tagged "'30s punk" by one critic. They have always flirted with a muse most concerned with ghosts, love gone wrong, fever-dreams and stories unearthed from days past. Centered around the beguiling vocals of Katherine Whalen and the anachronistic windup toy that is Jimbo Mathus, the Zippers promise to both charm and confound.

Since 2002, the members have kept themselves more than busy. Katherine Whalen has released several solo albums, most recently the critical favorite Dirty Little Secret. Jimbo Mathus has also released several acclaimed solo records, all while working as musical director for legendary blues musician and Grammy winner Buddy Guy. Phillips was enlisted as composer for the Comedy Central TV show Lil' Bush and spent time touring with the Dickies. Widenhouse has performed throughout the country with his traditional jazz combo the Firecracker Jazz Band. Not to be outdone, Cole has written Dancing to Morocco, a travel guide of dark and dusty bars in Northern Africa, and has been performing extensively with Dexter Romweber. The band performed around 50 shows in 2007, and has just begun a series of summer tours. Look out for a new live record late in 2008, and a new studio record in 2009.

Film & Television:
? Soundtracks & Placements in Blast From the Past and Flirting With Disaster
? Intel Commercial
? HBO - Six Feet Under
? Family Plots Theme
? Happily Never After
? Under The Sea Video release