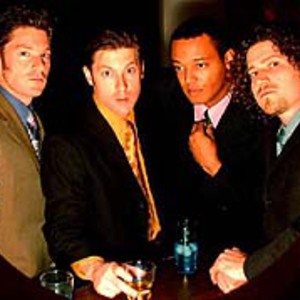 Splitsville is a Baltimore based band born out of the ashes of the critically-acclaimed power pop band Greenberry Woods. Matt Huseman remained on guitar, his twin brother Brandt Huseman made the switch from bass to drums (which he had never previously played), and they joined up with bassist/keyboardist Paul Krysiak to form Splitsville. They have released five albums, one EP and a greatest hits collection. Biography Splitsville USA

Splitsville USA
The trio got together to record for the band's first album, basically in Krysiak's basement. As would be seen in subsequent albums, the songs on Splitsville USA would carry a consistent theme. For their debut, the band explored songs of adolescent fun, with obvious titles such as ?Cartoon Boy?, ?I Was A Teenage Frankenstein?, ?Sit & Spin?, ?Imaginary Friends?, etc.

While a distinctly lo-fi affair, Splitsville USA (a pun on Motown's nickname ?Hitsville USA?) received generally positive reviews and allowed the band to embark on a tour of the Midwest. John M. Borack of Trouser Press wrote that Splitsville "...goes for pop-punk laughs on its maiden voyage. With song titles like "Come Back to the 5 and Dime, Larry Storch, Larry Storch," "I Was a Teenage Frankenstein" and "Gremlin With Mags," it's pretty evident how seriously this is all meant. Still, Splitsville U.S.A. is often hooky enough ? in a Buzzcocks/Redd Kross fashion ?to hang in there."

It is worth noting, however, that the Husemans were still members of the Greenberry Woods, and the Splitsville project began to create tension within the band.

Amateur Hour
Six months after the recording of Splitsville USA Splitsville completed a 17-minute opus Amateur Hour. The band describes this concept ?album' as "?the bastard child of Sergeant Pepper and Tommy with attention deficiency disorder". To date this recording has not been available for sale and was played live in its entirety only once at Fletcher's in Baltimore as a portion of a live webcast.

In 2008 Amateur Hour was officially released in Japan only (via Air Mail Recordings) as a special EP included with the remastered The Complete Pet Soul.

Ultrasound & Pet Soul
By 1998 the Greenberry Woods had broken up, and Splitsville became the Husemans' and Krysiak's main focus. The band ultimately signed with New York based indie label Big Deal Records. The first release with the label was Ultrasound. Again, the album was recorded with a specific concept in mind, this one being the perils of growing up. In addition, the recording and musicianship had vastly improved, and Splitsville shed its previous lo-fi feel. The record garnished good reviews and allowed the band to tour with label mates Shonen Knife. "Yearbook", the first single from Ultrasound, also received considerable airplay on various indie radio stations.

Soon after the recording of Ultrasound, Splitsville went back into the studio to record the four-song EP, Pet Soul. When the band played the 1998 Los Angeles Poptopia festival, Splitsville provided this EP as a special give away to attendees. This tribute to Pet Sounds and Rubber Soul created considerable buzz within the power pop community.

The trio had the luxury of six weeks to record, and Repeater proved to be their best album to date. The album was reviewed as "...a smorgasbord of great pop influenced equally by The Beatles, The Zombies, Queen, and the harder side of The Jam." And Popmatters.com called Repeater, "...a huge leap forward. It's rather like when Radiohead graduated from the mediocre Pablo Honey to The Bends."

To promote the album's release, Splitsville did another national tour and a handful of high profile shows before their label, Big Deal, suddenly dissolved. This, unfortunately, severely hurt the albums distribution.

The Complete Pet Soul and the Addition of Tony Waddy
In 2001 Splitsville decided to return to the EP ?Pet Soul? and further mining the vein of 60's rock. The Complete Pet Soul was released to international critical acclaim. The album featured four songs culled from the Pet Soul plus six new originals and a cover of Burt Bacharach's "I'll Never Fall in Love Again". This cover was later featured in the Kirsten Dunst movie Get Over It. (It was also previously featured on the Burt Bacharach tribute album What the World Needs Now.)

All Music Guide gave the CD a rating of 4 and ? stars, stating "...the (original) orchestral tracks are nicely balanced with several new songs that recall the low-voltage, almost folk-rock sound that predominated on the original U.S. edition of Rubber Soul."

The CD was released through Air Mail Records in Japan and Houston Party Records in Europe.

The band decided to tour Spain, and in the fall of 2001 Splitsville became a four-piece. Tony Waddy joined as the lead guitarist (as well as occasional bassist) and contributed backing vocals. As a foursome, the band was able to add songs previously unperformed in their live set. The tour of Spain included local and national radio interviews in several cities, numerous print interviews and a live concert taped for Spanish national television.

Also in 2001, Air Mail also released the import album Bulk Rate, which included choice cuts, live tracks, re-mixes, and a previously unreleased cover of The Who's "Our Love Was". The cover art intentionally aped that of The Who Live at Leeds.

Incorporated
Throughout 2003 Splitsville was busy recording songs for what would become their fifth full-length album, Incorporated. Licensed to Houston Party Records in Spain, the CD subsequently (via importers) found its way to the US, Europe, the UK, and Japan by the end of the year. Unlike previous albums, Incorporated did not have an over-arching theme. Yet the CD is easily Splitsville's most diverse, with songs in the style of power pop (?Headache?), punk (?Trouble?), straight rock (?White Dwarf?, ?Brink?) and even funk (?Heart Attack?).

Similar to their previous CDs, Incorporated received very favorable reviews. Incorporated, has been called, "a tiny burst of awesomeness" by The Onion, while All Music Guide stated that Splitsville, "...is poised, as ever, between the harmony-drenched sound of Teenage Fanclub and the energetic drive of Weezer, and they have come up with a handful of tracks that either of those bands would have gladly added to an album."

This acclaim has also been reflected by album sales in the US and abroad. Incorporated made it onto several "Best of 2003" lists and promptly sold out in the US within the first month of release.

With tracks hand-picked by the band, Let's Go! is a 25-song overview of Splitsville's entire career. Among the tracks included are "Yearbook", "Manna", "Day Job", "Forever", "White Dwarf" and "Headache".

Unreleased and Obscure
Splitsville has recorded numerous covers of such artists as Teenage Fanclub (?Tears Are Cool?) and The Who (?Our Love Was?), which have made it onto compilations and tribute albums.

The band also has several unreleased tracks (i.e., "Leather Makes Me Crazy", "Renae's Boots", and "Can't Believe I'm Falling For This One") that may or may not be released as part of a collection titled Strum und Drang.

Let's Go! The Best Of Splitsville